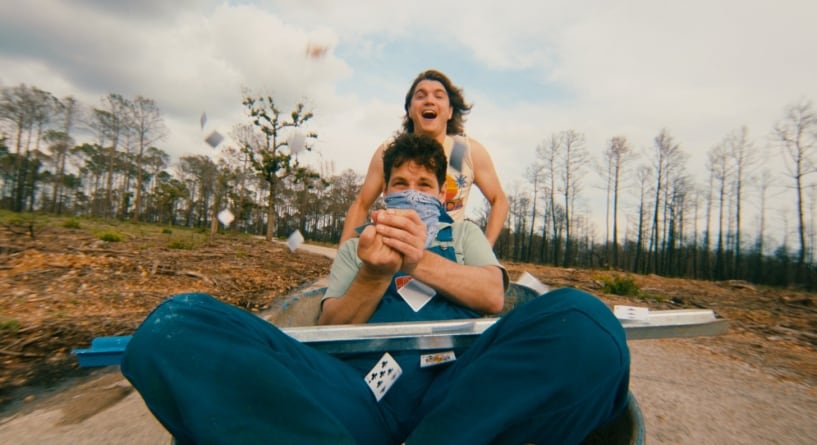 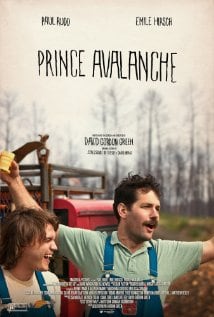 David Gordon Green may best exemplify the term “burn out” in all its splendorous connotations. The creator of one of the strongest films to crawl out of the ‘00s, Green took some erroneous turns with Undertow and Snow Angels, two wrong-headed morality plays that lacked the poeticism of All the Real Girls, before really crashing into a rut with some of his buds. And by buds, I could mean pals like Seth Rogen and Danny McBride, or buds in the avocado sense as Mr. Green went from art film director to the man behind the lens of the amusing Pineapple Express and the pretty awful Your Highness. By the time the Jonah Hill-starring The Sitter hit the screens in 2011, it appeared we lost David Gordon Green to something that shares his familial moniker.

In his latest film, Prince Avalanche, Green returns to the poetic landscape of Real Girls and his debut George Washington, while injecting some of the bromance ejaculate that have spiked the testosterone levels of his recent films. Based on the 2011 Icelandic film Either Way, Avalanche tells the story of two very different road workers, laboring after a 1987 Texas forest fire, giving Green the opportunity to meditate on masculinity and loneliness against the backdrop of scorched earth.

Alvin (Paul Rudd) and Lance (Emile Hirsch), wearing hard hats and blue overalls, spend their days repairing mile markers and repainting yellow lines on an isolated stretch of road and their evenings in a makeshift campsite. Alvin pines for Lance’s sister, writing her love letters filled with philosophical observations about solitude. Meanwhile, Lance just wants to go back to town and get laid (or “get the little man squeezed” in his parlance). Green introduces the dichotomy between the two after a wordless prologue. Alvin wants to listen German for beginners tapes on their shared boom box while Lance is more interested in rock ‘n’ roll. Alvin is Lance’s boss and it is immediately apparent that he regards the younger man with contempt.

However, both men suffer from anxiety. Alvin separates himself from society to quell his nerves, spending his time fishing and contemplating life. Lance loses himself in sex. The entirety of Prince Avalanche takes place in those lonely woods, a secluded petri dish where each man must battle the other, nature and his own demons before they can ultimately become friends. That, and a good deal of homebrew alcohol supplied by the only other person they encounter in the woods (and yes, I know there is another, but whether or not she is corporeal is up for debate).

Both Rudd and Hirsch do a marvelous job with their characters, inflating Alvin and Lance (say it fast) with a lived-in knowledge and breezy air that allows the actors to stretch into their roles. Rudd, sporting a bad mustache, is given a chance step outside his recent work in caricature and in this meaty role, expands on the confused man-child part he often plays. Hirsch, looking more and more like Jack Black’s younger brother, has a harder job playing the buffoon, but he imbues Lance with layers of insecurity that make the character feel realistic.

Green abuts his character study with numerous naturalistic montages, channeling his inner Malick. Aided by an Explosions in the Sky soundtrack, Green’s camera contemplates dew-kissed pine needles, turtles, shadowy forests and blazing sunsets. He seems like an artist that has been given back his brush and palette and having a gay old time re-learning how to use them.

While it is easy to reflect fondly on Prince Avalanche, the film could have gone deeper, been a more penetrating character study. Yeah, we’re never really alone, but Green once again turns to a substance (this time the alcohol) to unlock the inner workings of Alvin and Lance. The cathartic climax, though comical, feels abrupt and at times the dialogue smacks of the purple writing that marred Undertow and Snow Angels (including a retread of the“fire in my heart” line). The people in All the Real Girls didn’t necessarily speak like real folks, but within in the world Green created, the dialogue made sense and never felt false. Prince Avalanche is a step up from his recent work, but at the same time, still feels very, very self-conscious at times. Just like the two divergent personalities at the heart of the story, Prince Avalanche is at times rent in two by its comedic and dramatic sensibilities. But for fans of Green’s first two films, Prince Avalanche feels like a sharp inhalation of fresh air. Interesting that it took a setting that is all charred and smoky for the director to find his footing again.