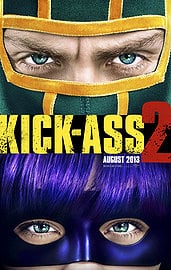 [xrr rating=3.0/5]Kick-Ass 2 continues the same uneasy relationship between comedy and violence that made its predecessor a love-it-or-hate-it production about normal folks who dress up like superheroes. As unlikely as it may seem that such a movie warranted a sequel, here it is, and those who hated the first incarnation will very likely find nothing redeeming about this new one. However, for those able to enjoy the subversive nature of the prior film, Kick-Ass 2 continues on the same track.

With Jeff Wadlow taking over the directing reins from Matthew Vaughn, Kick-Ass 2 focuses more on Hit Girl (Chloë Grace Moretz) as she attempts to leave behind her superhero alter ego and become a normal teenager. Despite the protestations of Kick-Ass, aka Dave Lizewski (Aaron Taylor-Johnson), Hit Girl falls in with a group of bitchy girls straight out of any generic teenage film. As his ex-partner goes on the straight and narrow, Dave seeks out the company of a group of vigilantes led by the knife-wielding Colonel Stars and Stripes (Jim Carrey). But just like any superhero movie worth its salt, trouble soon arises, pulling both Kick-Ass and Hit Girl back into the fold.

As immature as it may be, the word “motherfucker” by itself makes me chuckle. Christopher Mintz-Plasse returns with a new secret identity, calling himself The Motherfucker, and he is hopping mad that Kick-Ass killed his old man. He recruits a gang of super villains to destroy Kick-Ass and the ones he loves. And once the gang kills off a few of the film’s main characters, the shit really hits the fan.

Kick-Ass 2 is extremely violent and Carrey has since distanced himself from the production, refusing to do PR for the film. A few months ago, he took to Twittter with the following declaration, “I did Kickass a month b4 Sandy Hook and now in all good conscience I cannot support that level of violence … my apologies to others involve [sic] with the film. I am not ashamed of it but recent events have caused a change in my heart.” After viewing the movie, it is easy to see why Carrey has denounced it. The violence here is much more realistic than other superhero films and it’s played for laughs.

But that’s exactly the point. There is nothing worse than seeing a film with realistic violence and hearing people laugh in the theater. Kick-Ass 2 gives us license to laugh at ultra violence, and whether or not that’s okay is up to the individual viewer. However, can we give filmmakers a pass to do anything outside the bounds of good taste if they hide behind the “it’s only a joke” defense? For some reason, the melding of extreme violence in a comedic superhero universe is a lightning rod for controversy. Metropolis and Smallville can be smashed to hell with millions of their denizens killed in Man of Steel without a single complaint. Yes, it’s mostly done off-screen, but in a post-9/11 world we still see films where entire cities are reduced to rubble in the name of fantasy. Or maybe we’re just numb to it as one blockbuster after another shows us carnage on a global, rather than local scale. Kick-Ass 2 takes that damage to the individual level, reveling in the same type of violence but with more clarity. The film has also been a source of controversy for a scene in which an attempted rape is played for laughs. However, Pedro Almodóvar is a rarely admonished for the use of rape as comedy in his films. But once again, it’s about forum. Almodóvar is considered a director of “art films,” which gives him more of a pass while the empty-headed nonsense of Kick-Ass makes it more culpable for its peccadilloes.

Kick-Ass 2 uses misogyny, racism and homophobia as its comedic playground. Bad taste is precisely the idea here. However, bad taste really isn’t enough to condone some of the material. The best way to protest is to stay home (and that is your choice), but I guarantee you a good number of folks tutting their tongues at the Kick-Ass franchise are chortling away as Channing Tatum blows away baddies in other generic summer fare. You can’t have it both ways.