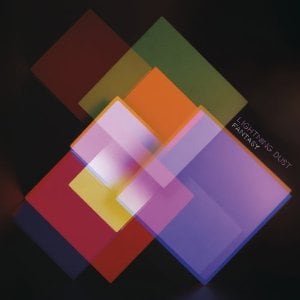 [xrr rating=3.5/5]To a listener unfamiliar with Joshua Wells and Amber Webber’s Black Mountain side project Lightning Dust, it’s immediately clear by opening track “Diamond” that their third LP features little of the rampaging psych rock of their parent band. Instead, this hybridized Fantasy occurs on muted, gothy and remixed, almost Cocteau Twins levels – a hip-hop snare, spare shakers, sprawling bliss-outs and the slightest twang snaking into Webber’s vocals round out at least the combination available from “Diamond.” That’s not to say there’s an intense uniformity to Fantasy, but several tracks are of a kind: “paper thin walls” on “Mirror” herald shifty, macabre electro-pop along the lines of Fever Ray before moving into roomier territory. By contrast, “Loaded Gun” translates that particular strand of dark Scandinavian pop fairly directly, down to the industrial percussion and occasional crack in Webber’s vocal.

Despite (or perhaps because of) the heavy beat opening it, “Reckless And Wild” could be the counterargument to anything from last year’s Perfume Genius record Put Your Back N 2 It. Minimalistic and paced like a post-electronic dirge set to unthreatening ‘90s FM, Webber evokes the moody timbre of Poliça’s Channy Leanagh (minus the Auto-Tune). Directly following, the folk lilt in “Moon” spotlights Fantasy’s first tonal costume change. With a layer of blooming, subtly cascading textures draped over Webber and a simple acoustic, the saturation is luxurious, though the track itself doesn’t manage to stick around long. “Agatha” and “Fire, Flesh And Bone” plod along similarly, though the latter explodes into color and an expressive conclusion. “Never Again” carries Fantasy’s modest 10 song cycle through its tumultuous, dramatic ending.

The album really finds its footing on “Fire Me Up,” where Lightning Dust turns on their heads the raggedy synth pop of Grimes and Handsome Furs, the messy tape manipulations of chillwave and deep cuts from the 1980s, opting to blend them together into a symphonic cavalcade of keys, percussion and vocals half immersed in the forceful pop harmonics of sounds such as Fleetwood Mac’s and half in the dreamy morass of the previous tracks. “That’s what entertains us/ Listening to the water rush,” Webber manages in her most aggressive snarl. By the same token, “In the City Tonight” reinvigorates Fantasy’s back end, its pushy, fuzzy hip hop/electro rhythms anchoring Webber’s most spirited vocal turns on the album. To attempt to recapture or wholly recreate the intensity of 2007 debut Infinite Light isn’t feasible, so this Fantasy will do nicely.