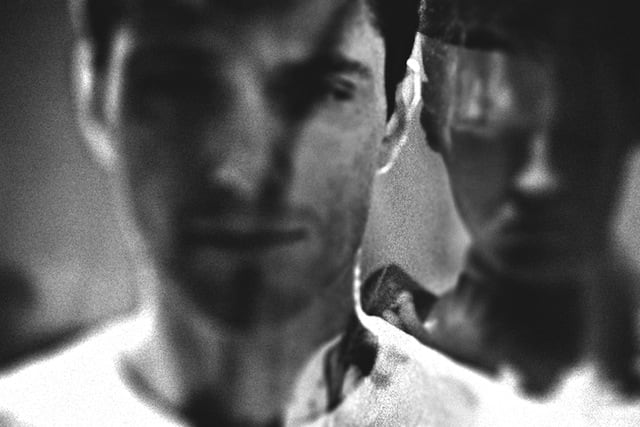 In most cases, I would have been quite upset with giving up a prime seat. But Rhye wasn’t that type of band and it certainly wasn’t the type of band where I could tolerate running commentary from the drunks behind me.

After three songs, I had had enough and moved from the front of the Aladdin Theater towards the back, giving up my seat just a few rows from stage. It didn’t really matter, however.

Rhye is a band that favors secrets. Half of the duo, which recalls Sade filtered through Little Dragon, didn’t even tour with Milosh. Producer Robin Hannibal suffers from stage fright and lets his partner handle the touring duties. Once again, it doesn’t really matter.

Why not? Because the band was backlit with purple lights for the entirety of the set, casting them in shadows.

For Rhye, it’s about the music and not acting like a rock star.

Flanked by a six-piece band, Milosh recast many of the songs off Woman, Rhye’s debut album, for an audience, drawing out the jam with his string section for some songs, focusing on vocal crescendo with others. With an admitted dearth of material to build a setlist, Milosh also added a few songs from his self-titled solo project.

After a brief instrumental intro, the band broke into “Verse,” its smooth sound reconfigured for the live venue. While Woman is the type of thing to listen to with the lights out and the bedroom door closed, the live band, featuring a string section, made its songs jump with life by adding more of a beat. I have to admit I was relieved when I saw the band take the stage. I was half-expecting a guy singing after pushing play on his Mac laptop.

But back to those dickheads behind me. I kept trying to get into groove, sail along with the intimacy of the songs but the woman kept interjecting her opinions and jabbering non-stop. I decided not to start an argument at a Rhye concert and switched seats.

The not-so-secret weapon behind Rhye is Milosh’s voice, one that many (including me) confused as belonging to a woman when Woman released a few months ago. Here, he sounded silky and even, handling the high notes with aplomb on songs such as “Open” and “Hunger.” Since we couldn’t see his face, it was impossible to tell how much strain those notes put on him, but it sounded great nonetheless.

The concert lasted a little over an hour with Milosh sheepishly declaring they had no more songs to play. It all felt fleeting, hard to grasp. The band even had a limited amount of vinyl to sell. We would need to approach the stage and buy them from the band itself. It was a wise move for Milosh and Rhye to ditch the intimacy of the recorded versions and reach for the sky in concert. It was the same wise choice Justin Vernon made when touring on For Emma, Forever Ago. Rhye deserves the same level of success.