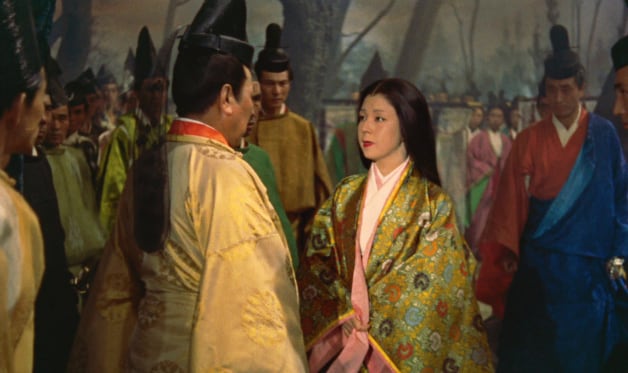 Time is the great divider of the wheat from the chaff when it comes to samurai films. During the country’s golden age of cinema (‘50s) and into the next decade, the major Japanese studios pumped out one film after another set in the medieval period. And now that time has revealed the best of the bunch, companies such as the Criterion Collection are reissuing the next tier of films, the ones largely forgotten as the years have passed.

Teinosuke Kinugasa’s Gate of Hell (1953) didn’t seem like a candidate to fall into the “forgotten” category. Upon its release, it won an Academy Award for Best Costume Design, the New York Film Critics Circle Award for Best Foreign Language Film and made off with the prestigious Palme d’Or grand prize award at the Cannes Film Festival. However, it wasn’t the film itself that likely swayed over all of the judges. Instead, Gate of Hell was the first Japanese movie released internationally to be produced entirely in color, a feat that makes it still dazzling today even if its subject matter pales a little when compared to other classics such as Seven Samurai.

Gate of Hell begins during the Heiji Rebellion of 1160, a time where two clans battled to control Japan. For a brief period, the Minamoto clan wrested power away from the Tairas, burning down the Imperial Palace in Kyoto. However, the Taira soon regained power and many of the Minamoto insurgents were put to death. The film begins in the period right before the Minamotos took Kyoto and follows the warrior Moritoh (Kazuo Hasegawa). As his comrades defend the castle against the rival clan, Moritoh is commanded to escort Kesa (Machiko Kyô) out of the city, acting as a decoy for the empress. Once the conflict is settled and the Tairas regain power, Moritoh asks Lord Kiyomori (Koreya Senda) for Kesa’s hand in marriage to repay his loyalty. However, Moritoh doesn’t know that Kesa is already married to Wataru (Isao Yamagata), the lieutenant of the Imperial Guard. Rather than let it go, Moritoh becomes obsessed with making Kesa his. 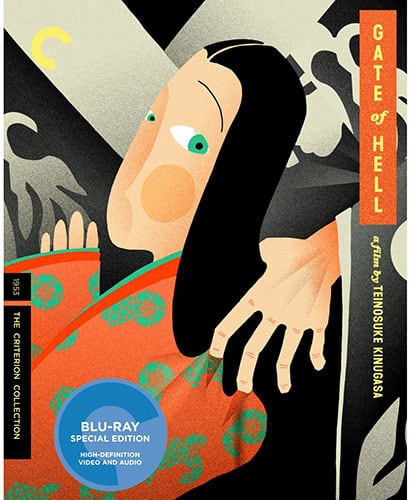 The rebellion comprises the first 30 minutes of Gate of Hell, while the final hour concerns Moritoh’s tragic attempts to make Kesa his wife. This split feels almost like two different films and Gate of Hell is a little slow to start. The extended prologue also gives no indication of where Moritoh’s demoniac determination to wed Kesa comes from. All we know is that he’s a staunch supporter of the Emperor, even as his own brother sides with the rebellion. So when Moritoh is rebuffed by both Kesa and Lord Kiyomori, his furor feels like it comes a little bit out of the blue.

More than anything, Gate of Hell earned its accolades for Kinugasa’s use of color. At the time, he used new technology from Eastman Kodak, as well as Eastman 5248 film stock, to present a sumptuous palette of colors unseen in prior Japanese films. These colors seduced audiences and look amazing in Criterion’s recent reissue, but after 60 years the effect may have dimmed now that color is common in movies.

Criterion’s release of the film is also significant because until recently it was considered “lost.” While Technicolor releases utilized a triple-strip negative, the Eastman stock only used a single-strip, a defect that caused films made prior to the ‘80s to degrade, including Gate of Hell. Thankfully, a 2011 restoration using original black and white separation masters has returned Gate of Hell to its original, brilliantly colored magnificence.

While it will never rank among the first level of Japanese films from the ‘50s, Gate of Hell holds an important historical benchmark for its use of color. Its final hour is riveting and frightening, especially after Moritoh goes off the deep end and becomes violent. The first 30 minutes, however, could have easily been summarized in an interstitial title or a brief prologue. But fans of Gate of Hell aren’t necessarily paying for the story. They want to see the lavish costumes and bright colors, and for them, 90 minutes isn’t enough.