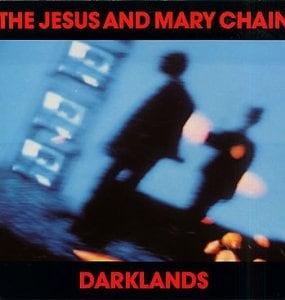 For those excited by the raw, feedback-laden wall-of-sound of Psychocandy, the arrival of the Jesus and Mary Chain’s 1987 Janus-faced sophomore record Darklands might have come as quite a shock. The Scottish brothers William and Jim Reid replaced their drummer with a machine — seems he was busy forming a little side project called “Primal Scream” — and then proceeded to confidently write, play and record a melodic, accomplished, darkly-themed pop record more mature than even their critically lauded debut. Crystal production quality, quiet in both mood and atmosphere, was completely void of the crashing, cacophonous drugged out Beach Boys mess that gave them their reputation and acclaim. When Jim was once asked in an MTV television interview to explain why he thought critics were so excited about the band’s sound, Jim responded very matter-of-factly, “It’s because we’re so fucking good.” Though the interviewer laughed it off awkwardly, Darklands would seem to have vindicated him of the arrogance.

Darklands seemed cleverly targeted for mainstream pop chart success and performed as such, taking them all the way to the number five slot on the strength of singles like the title track. A gentle guitar melody plucked out on electric strings that sway like a warm breeze, the opening song suitably establishes the surprise element. It was a long way from the crashing, squealing, “My Little Underground.” William takes lead vocals on the track with lines such as, “As sure as life means nothing/ And all things end in nothing/ And heaven I think is too close to hell.” At the root of the song the structure and lyrics are the same aesthetic drawn on Psychocandy right down to the dragged out and irreverently pronounced doo-wop filler in the latter half. But it’s all cleaned up, the feedback resolved into tight, naked chords, presented more accessibly. The Jesus and Mary Chain was the kind of band that could get away with singing out a lovely ditty with lines like, “Take me to the dark/ I gotta get down on my knees/ And I feel like I could die/ By the river of disease/ I’m dying/ Yeah I’m dying,” and then strum through an entire verse of encouraging “da da da/ da da dooo.” What’s most remarkable is how well it all works; their strength is in their conviction.

“Deep One Perfect Morning” begins with the patter of a single tom drum and simple, slow-burn strums. Jim sings vocals on this one and the track highlights the true unobstructed level of songwriting talent of which the duo is capable. While the “Darklands” track had all the elements of what could have been a psychedelic rock ballad from Psychocandy played slow, this one is not simply a translation. It’s delivered with a deep conviction, rooted firmly in the unique sound of this record. The lyrics are genuinely hopeful: “And my thoughts are turning backwards/ And I’m picking at the pieces/ Of a world that keeps turning the screws/ Into my mind/ And I can see a wide world/ For me to tame.” It goes quickly from Leonard Cohen-like baritone of Jim’s opening vocals to a soaring pop ballad.

“Happy When It Rains” and “Down on Me” turn out to be the real harbingers for the up-tempo, contemporary alt-rock of the follow up, Automatic. The pounding of the snare breaks free from the heaviness of the opening tracks and lets loose with climbing guitar lines. The velocity of the buzzing riffs stops just shy of the dance floor, preferring instead the headphones of the nearby wallflower. The electronic drums and rock guitar play off Jim’s upbeat vocals with solid but patient timing. The restrained delivery of “Happy When It Rains” with its duality of positive melody and negative themes would become the bands signature. Celebratory rock songs about love and self-destruction played next to surf rock for a dried up beach. This is further illustrated in “Down on Me” — a fast rock ‘n’ roll song that still somehow manages to sound introverted and self-reflecting largely due to the interplay of the shared vocals. While Jim effortlessly sings the lead, the signature sound of the brothers’ pained growls and whines mix in subtly adding tension and uncertainty to what should be an upbeat anthem.

“Nine Million Rainy Days” is the most minimal and moving track on the record. William takes over vocals again and sings out this perverse song of love and devotion. “I have ached for you/ I have nothing left to give/ For you to take.” The tone is set as a sad love song but quickly turns sour and menacing: “And the way you are sends the shivers to my head/ You’re gonna fall down dead.” The Jesus and Mary Chain would continue to play off this theme of love as a cause of derangement and personal downfall throughout their catalog.

“Fall” is the track most reminiscent of Psychocandy, devolving into an all-out feedback tear-down, but it’s easily forgotten as the light-hearted love song “Cherry Came Too” sweeps up the mess. But here again there’s an odd sense of menace as Jim gleefully sings without a hint of irony or drama, “Cherry scratching like a grain of sand/ The trigger itch of the killer’s hand/ Me and Cherry are so extreme/ Making love to the sounds of a scream.” To write it sounds almost comically malevolent, but the quality of the guitar instrumentation and melody have you snapping, nodding and tapping your foot to the sound of this unfortunate situation.

There is no element of Darklands that dates it save for the sound quality of the electronic snare drum. But even the slight reverb only has the effect of contributing to the overall cold, wet ambience of an album for which distorted guitars, hi-hat and slow rock song structure lends a quality which survives to this day. The records which followed all retained some elements of what began on this record, but despite their merits never quite met the same bar for end to end appeal. Each track could stand as a potential single. Clearer than the songs of Psychocandy, warm and more intimately delivered than anything on the highly produced records that followed, the material on Darklands ranks among the Reid brothers’ finest work.