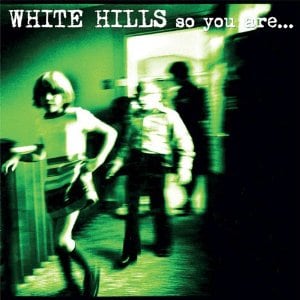 [xrr rating=3.25/5]New York’s White Hills are a noise rock outfit whose previous efforts, such as 2007’s outstanding Heads on Fire, seamlessly blended over-the-top swathes of distortion with a touch of head-spinning psychedelia and a whole lot of groove. In 2013, the band’s seventh release, So You Are… So You’ll Be utilizes similar ingredients but in different proportions. Namely, there’s a de-emphasis on rock ‘n’ roll riffage and a good deal more studio knob twirling. The results are not always compelling.

Let’s be clear: the band can still rock plenty hard when they have a mind to. “In Your Room,” the second track on the album, explodes with a squall of guitars, a wonky time signature (5/4 maybe?) spaced-out vocals and plenty of wah-wah-inflected guitar jams. Elsewhere, title track “So You Are… So You’ll Be” finds that sweet spot between repetitive and hypnotic, with a punchy guitar riff that plays over and over and over and over as Dave W.’s dreamy vocals repeat the song title. This is White Hills at their best, mining a vein of almost industrial sonics to create an irresistible tide of sound that engulfs the listeners and carries them away. Think of album opener “Radiate” on Heads on Fire. The hornet-buzzing-against-the-window guitar solo is pretty sweet too.

The good news is that there’s some of that here. The bad news is that there’s not enough, especially in the album’s first half. The band alternates their drone ‘n’ roll rockers with pointless tracks of studio bleeps and blurps, to no apparent effect except to make the listener impatient for the next, y’know, song. Given that there are only nine tracks here to begin with, none of which is stupendously long, the fact that four of these tracks are given over to nothing more than echo chamber special effects is particularly egregious. “InWords,” “The Internal Monologue,” “OutWords” and “Circulating” all serve as filler or, at best, as palate cleansers between songs. They are not needed, and could have usefully been replaced by another real tune or two.

But let’s not dwell on the negative. The standout track here is “Forever in Space (Enlightened),” maybe the most “conventional” rock song here but also one of the most epic. Dave W.’s voice hovers over a dense bed of guitar fuzz, thrumming bass and pounding drums, and when layered guitars kick in for an extended lead, it’s easy to imagine oneself as some kind of latter-day dervish, spinning to the celestial beat and losing one’s ego in the process.

In fact the album gets stronger as it goes along; the pointless interludes become fewer, and some merge within the songs themselves, making their connection more organic to the music and not so jarring. “Rare Upon the Earth” is suitably thrashing, if not especially memorable, and melts down into a satisfying squall of feedback by the end. “Circulating” is, unfortunately, more of that pointless yawn-inducing studio wankery, but album closer “MIST (Winter)” is a strong effort that sees the band approaching new heights of sonically immersive intensity. The middling tempo is neither as flat-out stomping as, say, “Forever in Space (Enlightened),” nor is it so swampy as some of the previous tunes. Instead, the tempo—and the song—find an effective, instrumental middle ground between thrasher and dirge, and the layered magic carpet of guitars takes the listener away on a particularly trancelike note.

This is what White Hills does best, creating a noise-filled space in which, ironically, the listener can locate that silence within. Just cool it with the filler tracks, guys, and you’ll be back to making great albums.