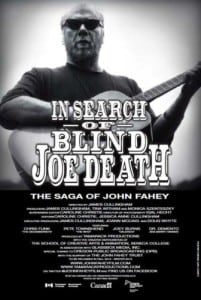 [xrr rating=2.75/5]The best documentaries of enigmatic music figures do not attempt to solve the mystery of their subjects. Bob Dylan, a repository for both bad writing and visual documentation that seeks to figure out the most mysterious of rock icons, has nevertheless enjoyed both a nonfiction film (Martin Scorsese’s No Direction Home) and a fictional one (Todd Haynes’ I’m Not There) that each pore over his legend while preserving it, finding value in Dylan’s insolubility while filling in cracks around it and even critiquing it. The films that attempt to provide a skeleton key to an artist’s biography tend to crowd out the effect of the art in question, meticulously piecing together the facts of the person’s life without tying them to the very thing that makes that subject worthy of public study in the first place.

To James Cullingham’s credit, In Search of Blind Joe Death, a 57-minute short documentary on legendary avant-garde/primitivist guitarist John Fahey, does not waste time in explicating any more of Fahey’s actual biography than it needs to. Fahey’s personal change-ups—moves here and there, marriage and divorce—are remarked upon in passing, and only in relation to how his music bore out such events. The most in-depth focus on Fahey’s private life concerns his early years, from a childhood on the rustic, nature-filled edges of Washington D.C to his scheme of getting his hands on old 78 records of blues musicians by traveling to still-segregated black neighborhoods to buy vinyl off people. In the doc, we listen to music writer Li Robbins tie Fahey’s roots around parks and streams to the cyclical yet flowing nature of his playing, while old friends reminisce about his dangerous vinyl-grabs and tacitly bridge his obsessive need to discover forgotten bluesmen to his later efforts to resuscitate the careers of some after he founded Takoma Records.

The rest of the film, however, sprints through Fahey’s career while devoting most of its energy to reflecting the artist’s style, not only his playing but his myriad artistic pursuits, from label-managing to painting. Animations bring his primitivist folk album covers to life, their quirky designs peppered with cartoon signs of nature dancing around the record. Most delightful, though, is Cullingham’s layering of talking head tidbits on Fahey that are joined to elements of his sound. When someone makes note of Fahey’s alternative tunings, a song in the background bends into some realm between tones, and the Bartók name-drops come complete with light dissonance.

The spare nature of the film’s length and scope is reflected in its modest number of interview subjects, but that does not preclude a few intriguing insights. Stefan Grossman recounts the entertaining “feud” between himself and Fahey, started by the latter seemingly in a bid only to amuse himself, while Joe Bussard, the founder of Fonotone Records (the small label that made Fahey’s first recordings), makes clear what a great early match he was for Fahey, doing his interview while standing in front of a wall that appears coated in tacky wood paneling but is revealed to be an endless supply of 78s in yellowed sleeves. Pete Townshend lends big name credibility to Fahey’s greatness, speaking reverentially about this fringe figure and comparing his playing to the writing of Burroughs and Bukowski. It’s these subjects, who speak less about the concrete facts of Fahey’s life than the impressions he made on them, that give In Search of Blind Joe Death its greatest power.

Even so, there is a gap here that makes Cullingham’s inventive and atypical approach to artist biography feel incorporeal. It avoids the pitfall of over-explaining an artist with a dull information-dump, but it nevertheless fails to fully join its impressionistic melding of image with Fahey’s music to any deeper revelations, which results in a play of signs without a signifier. Artist documentaries tend to be judged by the criterion of how well they convince the viewer to seek out that person’s music or films or paintings, and by that measuring stick, this film works. But there is a difference between preserving an artist’s mystery and failing to engage with it: In Search of Blind Joe Death never rises above the mark of a mildly adventurous TV special, and its stylistic cleverness cannot disguise that this is, at heart, not far off from a cursory overview.