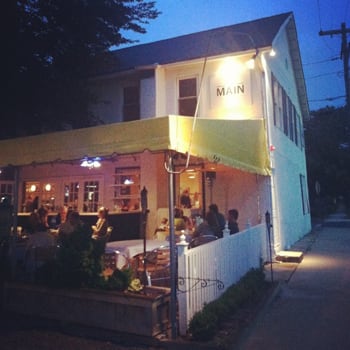 Perhaps the greatest symbol of the distance between Chef Keith Luce’s old restaurant, Luce and Hawkins, and his new project in Greenport, North Fork Square, is the butter. That’s right; the proof is in the butter. At Luce and Hawkins, it arrived in a crock at room temperature, creamy and spreadable, always accompanied by crusty bread and homemade sea salt to heighten the effect of the butter. At Main, it arrives cold, pressed into the decorative rounds that you might find in an airport Hilton’s throwaway “bistro.” It was eminently un-spreadable.

We’re getting ahead of ourselves though. Luce left Luce and Hawkins last year to prepare to open a complex of establishments in Stirling Square, right in downtown Greenport. Main, the aforementioned restaurant, is the anchor, augmented by Nosh, a bakery and espresso bar which also has wraps and sandwiches available for takeout, and Prep, a takeout window that has various flatbreads and charcuterie available. Meet, the final piece of the puzzle, is a wine tasting room that will also have prepared foods available for purchase (it was not open yet at the time of our visit).

The whole project is exceedingly ambitious. The danger though is that the attention to detail that made Luce’s previous venture into arguably the best dining experience on Long Island is getting lost in the wake of that ambition.

Thankfully, it’s the food that has suffered the least as the Chef puts together all of the pieces of his project. After all, Luce is a supremely talented chef and while his old project veered towards fine dining, at Main he dials the focus back towards comfort foods. The only holdover from Luce and Hawkins’ old menu is the North Fork Duck Wings, and rightly so. The combination of the vinegary chili coating and the yogurt dipping sauce makes for a creative take on otherwise standard bar fare. Another North Fork branded appetizer impressed too, a take on a Cobb salad that played straight lines of lobster salad, hard cooked eggs and crisp bacon atop crispy greens to great effect. Scallops, halved crosswise and served in a scallop ceviche with avocado, were meltingly tender and fresh, rescuing an otherwise standard ceviche that played it a little too straight.

The main courses are also reflective of the shift towards traditional comfort food. Gone is the hamburger with the whimsical flourish of foie gras mayonnaise from Luce and Hawkins, replaced by a Latin-tinged concoction with jack cheese, salsa fresca and a weirdly incongruous tortilla bun. Cioppino, the comforts of the sea, arrived laden with a lobster claw, mussels and clams in a garlic strewn tomato broth. The seafood might have been shaded towards the overcooked side, but the real disappointment was in the lack of bread to mop up the otherwise excellent broth. We resorted to using the French fries from our lobster roll to try to soak up something to little avail. And on that lobster roll — which was fine but again very straightforward – lobster meets good mayo meets good bun, served with very good fries. For a chef that gave us sublime, imaginative dishes at his old haunt like sweet and sour pork belly with clams that I wouldn’t shut up about for two weeks, or foie gras with sourdough and pickled rhubarb that led to me pickling rhubarb and putting it on everything, the straight readings of so many dishes, while undoubtedly well done, leave you wanting more.

That might be an ephemeral complaint from someone who is biased towards Mr. Luce’s old style of imaginative cooking. This next one is not. The wait staff at Luce and Hawkins was well drilled: you never waited for anything, a drink, an appetizer or the check to the point of consulting your watch. Water never went unfilled and tables never went unvisited by an attentive staff. At Main, with an inside room and outside patio that were both half filled with diners, we waited 45 minutes for an appetizer to arrive, had to stand up and flag our absentee waitress down for a second round of drinks and got served our main courses twice by the same waitress who was utterly confused as to why we were digging into our plates. When she came back to apologize for the mix up, it was delivered without breaking stride as she breezed by to the next table. It wasn’t just our server and our table either. There was visible confusion in the room all night.

It might be in Main’s satellites where the value in a visit to the Square lies at this point. Nosh served up excellent peach tarts and fist sized chocolate croissants. If it weren’t in the same town as Aldo’s, I could easily see myself passing the time with a cappuccino in the front room which faces the summer bustle of downtown Greenport’s row of antique stores. Visible from through Prep’s takeout window is a vintage red meat slicer awaiting the fruits of the Mangalitsa hogs Luce is raising on his family farm in nearby Jamesport. For now, Berkshire pork prosciutto, flatbreads like their take on Margherita pizza and various sausages and burgers will have to do. It’s easy to see why this space attracted Luce: anchored by a large copper beech tree in front of Main, tables dot the gravel paths of the square and provide a shady respite to enjoy whatever happens to be coming out of the satellite kitchens on a given day. For a town that attracts so much foot traffic, it is a welcome sidebar.

Skip back to those Mangalitsa hogs that he is raising himself. Note that his family has been farming on the North Fork since the 1600’s (not a misprint). What Luce is trying to do here is grow a lot of his own produce, raise his own hogs for the myriad ways he can handle pork including house made charcuterie, pull in exceedingly fresh seafood from local purveyors, run a bakery and espresso bar, open up a wine tasting room to feature local wines… any one of those in isolation is a full time job for an entrepreneur. Luce is trying to pull off the whole chain. It’s admirable and I’m sure that I am not the only one who has followed his cooking who is rooting for him. It’s a problem though when all that attention to detail that was his hallmark is getting swept up into the vortex where it’s not accessible. That’s how you end up with straightforward dishes that fall flat, or are misplaced altogether. With wait staff that don’t seem to really care that your water is warm or your butter is too cold or that the table they seated you in is missing a chair. The Square, and all of its moving parts, is mere months old and it has time to iron out these kinks. I just hope they do before too many people utter the words I heard in their room the other night: “I am never coming back here.”