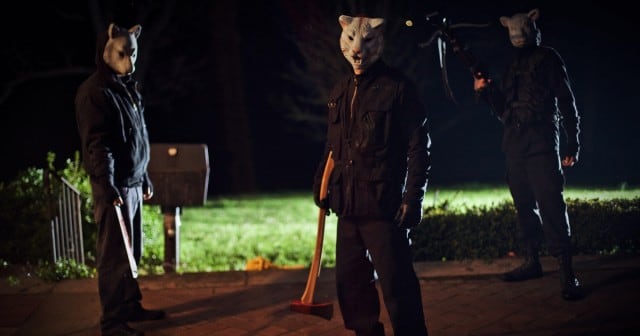 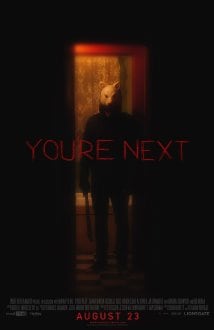 Scary movies are no longer scary when the closet light goes on. It’s like Chopper in Stand by Me, the myth and the unknown scare you, but when the beast is exposed, the legend stripped away, rarely does it remain as terrifying. Adam Wingard’s You’re Next, languishing on Liongates’ shelves since 2011, suffers from a similar problem. It’s a home invasion film that is scariest when we have no idea what’s going on, but when the motive is let out of the bag, all terror seeps out like blood from a slashed throat.

The premise is simple: a wealthy family gathers at a country home where they are terrorized by intruders in animal masks. The idea of random victimization is terrifying enough and You’re Next would have been a better film if Wingard left that part unexplained. However, there has to be a reason for all the bloodshed. See, the estate belongs to Paul Davison (Rob Moran), one of those rascally one-percenters (he was a defense contractor with a severance package). His wife is a pill-popping mental case and their four children are sniveling bluebloods with names to match: Drake (Joe Swanberg), Aimee (Amy Seimetz), Felix (Nicholas Tucci) and Crispian (A.J. Bowen).

When the bloodshed starts, Wingard thinks up creative ways to dispatch his victims whether it’s via crossbow, machete, sledgehammer or garrote. But the killers didn’t anticipate one thing. Crispian, a college professor who has been sleeping with his TA Erin (Sharni Vinson), has brought said girlfriend to the party. And she grew up in an Australian survivalist community. That’s right, while all the effete rich fucks are crying for daddy and getting butchered, the sole member of the 99% in the house is the only one who is capable of taking down the masked marauders.

Until it devolves into a ludicrous second half, You’re Next has some seriously scary and funny moments in its frontend. Guys in animal masks carrying weapons is frightening enough, but Wingard effectively shoots some great jump-out scares, taking advantage of the dark corners in that creaky, seemingly endless country estate. After a grisly prologue, Wingard and writer Simon Barrett also give the characters time to establish themselves before killing them off. While more fleshed-out than most horror movie fodder, most of the characters in You’re Next are quite unlikable, which makes their deaths easier to deal with, I suppose.

You’re Next also sports some casting choices that indie film nerds would likely appreciate. Swanberg, part of the mumblecore movement, plays a smarmy shithead who believes that television commercials define the best in filmmaking and director Ti West (The House of the Devil), plays a house guest who is killed quickly with a crossbow bolt to the eye. Like West’s film, You’re Next tries to recapture the grim mood of ‘70s horror movies and on some levels, it succeeds like Halloween, at least until we find out why the killers are there.

Unlike Wes Craven’s Red Eye, another horror film where the victim turns the tables and stalks the killers, You’re Next has a red little mean streak running through its core. There is glee in its bludgeonings and the weak of stomach should steer clear. However, sometimes it’s best to leave the beast in the shadows and as You’re Next changes from grimly scary to an over-the-top gore fest, Wingard should have gone back and consulted those ‘70s films where not everything has to be explained.