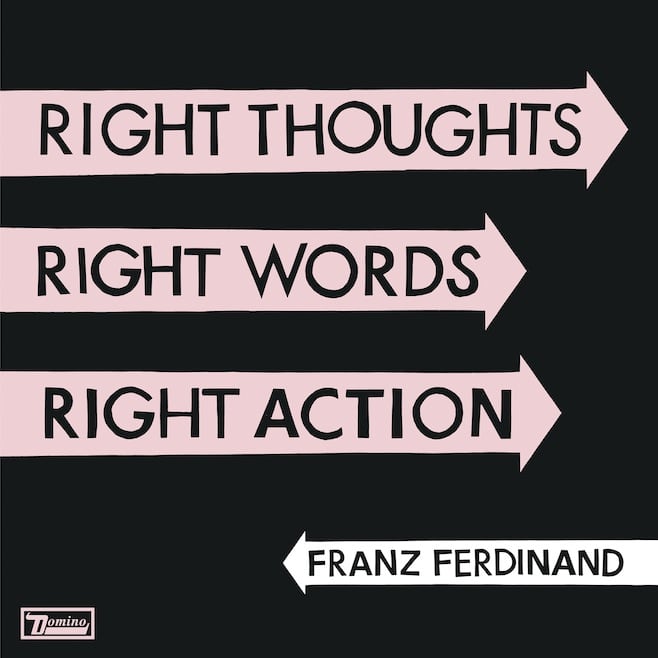 [xrr rating=3.75/5]Franz Ferdinand concludes their return to form, Right Thoughts, Right Words, Right Action, with the cheeky song “Goodbye Lovers and Friends,” where frontman Alex Kapranos lays out the funereal instructions, “Don’t play pop music, no/ You know I hate pop music.” In many ways, it’s a perfectly sardonic line to wrap up an album that’s nearly as self-aware as the beyond-the-grave narrator of that final track. Prefixes of art- and dance- can sometimes obscure the fact that this band is, after all, all pop and rock. But the fact remains that, nearly a decade removed from their heralded debut, Franz Ferdinand is as dapper and brash and accessible as ever. Right Thoughts… doesn’t in any way break new ground for the band, but instead it reestablishes that their sleekly-honed and immensely popular guitar and bass driven sound has got more hooks than a tackle box.

After a middling sophomore effort and lackluster third album, Franz Ferdinand had dropped off the radar over the past four years. Since the band’s inception, electronic elements have become infused with dance-rock to the point that more conventional guitar-bass-drum-keys bands within the genre have almost become quaint. While the four years between albums is a notably lengthy gap, the band made the right decision in keeping to what they do best instead of boldly going where no Franz had gone before. Not only had the pump already been primed for intricate guitar and gooey bass throwdowns with !!!’s superlative release earlier this year, but in waiting four years between records, Franz Ferdinand could confidently strut their signature sound without the risk of oversaturation. Instead, the band has given fans what they want and continued to follow their mission statement of keeping people dancing.

Much like their physical appearance on stage, Franz Ferdinand purveys button-down dance-rock, the kind where cutting loose involves untucking dress shirts with high thread counts and letting a few strands of product-laden hair break away from the rest. Their lyrics tend to possess both smarmy insincerity and an endearing form of quasi defeatism and Right Thoughts… continues in that vein. Opener and lead single “Right Action” opens up with the characteristic Franz Ferdinand jangle and bounce and Kapranos soon sings the indecisive line, “Sometimes I wish you were here, weather permitting.” It’s a near-perfect opener to reestablish the band’s sound for those who may have let them drop from heavy rotation over the past few years.

Part of the reason Franz Ferdinand’s approach requires little to no reinvention from record to record is due to the hint of throwback that threads through each new LP. The dark disco-beat in “Evil Eye” opens with a brief drumbeat that sounds an awful lot like “Billie Jean” and there’s even a shriek in the background reminiscent of “Thriller.” Meanwhile, “Love Illumination” offers a realistic take on coupling with the lines, “We could love, we could love you/ If you need somebody to love you/ While you’re looking for somebody to love.” And with its sharp-edged guitar, vintage organ and yelped vocals “Treason! Animals.” approaches something akin to a Talking Heads romp, especially as Kapranos channels the cadence of fellow Scotland-native David Byrne as he runs down a laundry list of his poor choices in lovers (narcissist, nemesis, analyst and pharmacist).

They’re not all winners, though. “Fresh Strawberries” is as cloying as its title suggests, and “Bullet” (while certainly high energy) ends up too quick on the trigger to really hit the mark. But the missteps are minor and barely detract from what is otherwise a superb regeneration of the sound that struck such a chord in Franz Ferdinand’s 2004 self-titled debut. Right Thoughts… proves that reboots can sometimes trump reinvention, especially when it comes to otherwise messing with a good thing.