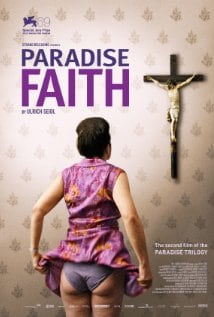 [xrr rating=4.5/5]Paradise: Faith is the second installment of Austrian filmmaker Ulrich Seidl’s Paradise trilogy, three interlocking stories of three women from the same family who find themselves at respective moral crossroads. In Faith, Seidl regular Maria Hofstatter gives an extraordinary performance as Anna, a devout Catholic who works as an x-ray technician. Part of her spare time is spent going door-to-door and aggressively trying to convert strangers to Christianity; the rest is spent alone in her home, where’s she’s prone to self-flagellation and wearing a cilice around her midriff—you know, normal stuff like that.

In typical polemic fashion, Seidl’s depiction of Anna’s faith is less than favorable. Early in the film, she’s presented as obsessive albeit relatively harmless, a fussy recluse with strong beliefs. (That’s how she’s presented in Paradise: Love, as well, where she passive-aggressively bickers with her sister before the sisters ships off to a Kenyan beach vacation.) But as Seidl reveals more about the character, shedding light on her most private and intimate moments and how they relate to her religious faith, a sense of unease gradually seeps into the material.

This unease is exasperated when Anna’s estranged husband, a wheelchair-bound Egyptian Muslim named Nabil (Nabil Saleh), reenters her life after being away for two years. Seidl doesn’t offer much in the way of a backstory, but this much is obvious: Anna is uninterested in picking up where they left off—she forces him to sleep on the couch, won’t allow him to touch her, and seems generally uninterested in spending any social time with him—but nevertheless abides by her wifely duties, as mandated by her religion but also her innate sense of decency.

Like many of Seidl’s films, there’s a tender, nearly sentimental human drama at the center of Paradise: Faith’s seemingly bleak story. Anna’s faith, not so much devout as it is abjectly fanatical, is a knowing attempt to erase her past. We’re never told exactly why it’s so important that she do so, but her conviction is palpable—though not enough to turn a blind eye to Nabil, whose physical dependency and bewilderment regarding his wife’s new lifestyle renders him instantly sympathetic, both to the audience and Anna. Thus, she remains in a sort of gridlock throughout the film, stuck between her desired life and her actual life, in love with an illusion and at odds with reality. The film culminates in one last leap of faith, which leads directly to a final scene as devastating and beautiful as the director’s ever staged.

As is typical in Seidl, Paradise: Faith lacks a certain narrative propulsion. The film embarks on long stretches where action is minimal and visual design is primary. If Seidl’s monotonous and often emotionally demanding stories are at all easy to stomach, it’s likely due to his precise mise-en-scene. He favors smooth surfaces punctuated with hard lines, usually in the form of a physical structure that borders the characters on three sides. A Seidl frame is typically flat yet deceptively deep tableau; the characters tend to adhere to the contours of the plane or regress further into the image, rarely, if ever, approaching the stationary camera. In fact, Seidl never gives us so much as a medium close-up, seemingly to promote a sense of spectatorship.

Indeed, the audience is kept at arm’s length throughout, though the same can’t be said for Seidl, who attunes himself to his material in a manner unlike any of his peers in contemporary European arthouse cinema. Since his early days as a documentarian, Seidl has teetered on exploitation, often goading his audience with uncomfortable and otherwise disturbing imagery, though never without thematic purpose. Paradise: Faith is no exception. Graphic sex abounds in a scene where Anna encounters an orgy of middle-aged exhibitionists in a park. The comic absurdity of the scenario, which starts with Anna cautiously creeping toward a chorus of moans and ends with her frantically rubbing herself with soap in a bathtub, has enough symbolic implications to keep from feeling pornographic despite the live sex depicted onscreen. Really, the scene is analogous to those in Paradise: Love, whose frank depictions of intercourse essentially demystify and therefore humanize sex, which is precisely why Anna is so perturbed by what she sees. In showing us the light and dark aspects of his characters, their sympathetic sides and their despicable sides, Seidl mines the moral complexities of human behavior.