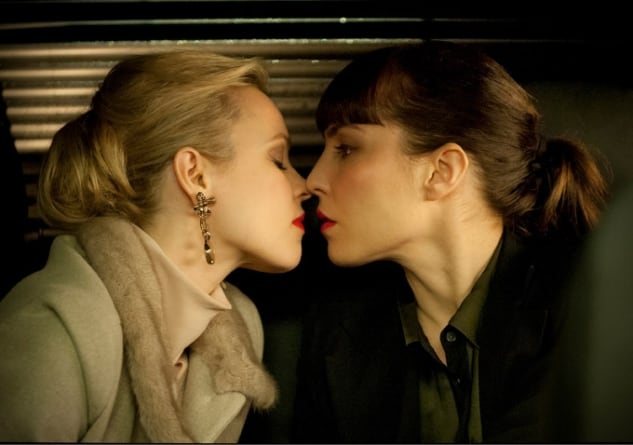 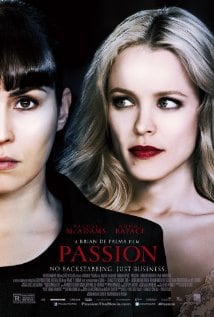 Six years after his widely panned war film Redacted, director Brian De Palma returns to theaters using the same strategy he employed throughout his career whenever he’s been humbled: he’s gotten as lurid as he can. Remaking the 2010 French thriller Love Crime (or Crime d’amour, if you prefer), directed by Alain Corneau, De Palma wastes no time getting to the id-tickling, placing his two attractive lead actresses together tight on a couch as they press their faces close to better watch videos on a laptop. Pino Donaggio’s score swells suggestively, the wine is flowing onscreen and the whole thing feels infused with De Palma’s trademark polished sleaze. To a degree, though, it’s all just a tease. De Palma fulfills his sordid promise somewhat, but he also seems to aspire towards a more measured, modern thriller. His inability to balance that against his baser instincts is just one of many reasons that Passion is so scattered and wan.

The film follows Christine (Rachel McAdams) and Isabelle (Noomi Rapace), executives at an advertising firm in Berlin. They’re trying to come up with an innovative, sexy campaign for a new smartphone, which Isabelle finally lands on with a brainstorm involving shoving it into the back pocket of incredibly tight jeans worn by fellow worker Dani (Karoline Herfurth), using the phone’s built-in camera to catch surreptitious footage of passers-by staring at her ass (judging by the footage, the phone’s camera is equipped with impressive Steadicam technology, which will surely be a marketable feature). When the client loves the concept, Christine is quick to take the credit for it, all in the name of securing a plum position in New York. She brushes off the infraction against Isabelle as the cutthroat nature of doing business, but a clear, damaging rift between the two women opens up.

Much of the rest of the film bides time by showing the way the conflict escalates, especially in the use of pilfered footage from ever-present cameras, the tool behind Isabelle’s creative triumph also serving to deliver humiliations and setbacks to her at every turn. There are also stray coworkers caught in the crossfire, including Dani and the philandering Dirk (Paul Anderson, delivering his best impression of Jeremy Irons’ gaunt oiliness). There are a lot of spinning plates to the plot, but so much of it is mechanical and rote. De Palma has made this sort of film many times over, and even he seems bored, flipping up revelations of duplicity and lust-fueled complications with the impassive precision of a double shift security guard on his 200th game of solitaire. There’s almost nothing that’s truly unexpected, resulting in a film that is resolutely dull.

There’s not even much to marvel at when it comes to De Palma’s vaunted aggressive visual style. For those that like to keep track of the director’s pathological indulgences, the pointless split screen shows up at almost precisely the one-hour mark, but that’s about it for flourish. He also fails utterly in guiding the actors to believable performances, the type that would be crucial to make a film such as this worthy of investment. If you don’t get strong performances, there’s nothing at stake, and the endeavor becomes an empty exercise. Rapace does well with the moments of high emotion, the sort with which she’s demonstrated endless fidelity ever since that dragon tattoo was first drawn onto her, but the more grounded moments are clumsy and strained. McAdams, on the other hand, looks like she’s regretting every minute of her time onscreen, which could actually work for the role if her line readings weren’t as stiff as a bronzed ironing board.

This inattentiveness to the basics of supporting his story’s intricacies with sound filmmaking gives the impression that De Palma’s contempt for his own material has reached new heights, as if he wants to make high art, but since audiences keep rejecting his important war dramas and literary adaptations, he’s always forced to scuttle back to the expansive trash with which he made his name. It’s not him, he seems be saying, it’s us. He’s tired of this junk and doesn’t care who knows it. That’s where I agree. I’m tired of junk like Passion, too.