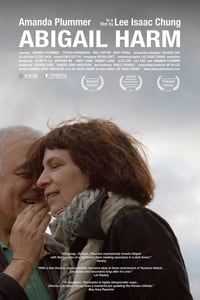 We meet Abigail (Amanda Plummer) reading Through the Looking Glass aloud to a blind man. A soft-voiced narrator (Will Patton) explains that Abigail makes her living this way, and somehow can afford a relatively spacious New York apartment on the proceeds. Practical matters are unimportant as we are immediately beaten over the head with wonder and mystery, as Abigail reads one particular passage that moves her so much she has to hold her hand out and brace herself on a wall. One of the many problems with Abigail Harm is that it never establishes a base normality. Everything in it is affected, written and not lived: the choice of Lewis Carroll episode, the peeling lead paint of an abandoned building, the pictures from an amateur porn mag she describes to client Burt Young. All of these precious incidents occur in the first 20 minutes of the film.

Abigail Harm is inspired by the Korean folk tale “The Woodcutter and the Nymph” and in one scene, Abigail looks at a picture book of this tale, describing it to herself in an inaudible mumble. It’s one thing to make the viewer try harder to engage with the work, to make the audience lean in or turn up their ear buds to better hear what’s happening. This could encourage audiences to become more intimate with the work, but the effect here is to alienate and to annoy.

The film is both obscure and obvious: the narrator notes that Abigail, in her work with the blind, spends her days never being seen by anyone. Symbol Alert! Naturally, the first human who really sees her in the movie is a magical woodsman (also Patton) who shows up in her apartment with a wound in his side, as if he’d been frozen and somebody had just attempted to remove his liver. The scene inadvertently recalls an episode of Chris Elliott’s gory Adult Swim series “Eagleheart” in which children are brainwashed by a children’s television host (Ben Stiller!) to remove organs from sleeping adults. That 12-minute episode has more insight and inventiveness than this long-at-80 minutes feature, but I digress.

Patton tells Abigail a story in which he’s supposed to be taking a bath, but in his recollection, he touches his fingers to his face as if he’s a blind man trying to recognize himself. (Symbol Alert!)

Then it turns into a love story.

Maybe the sight of Amanda Plummer chasing after her Asian and possibly alien lover like he’s a faun is some viewer’s idea of magical romance. But starting from its very name, Abigail Harm is stuffed with preciousness. The movie tries desperately to go against the Hollywood grain, but it’s just another independent film that smothers the emotional potential of its material in relentless quirk.