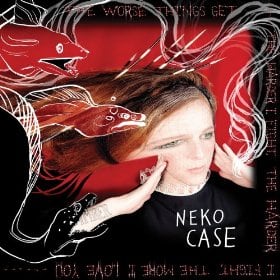 [xrr rating=4.25/5]Neko Case’s artistic development has progresses so gradually that it almost doesn’t seem to have happened at all. Much like her contemporaries (and current labelmate on Anti- Records) Wilco, Case released her debut solo album The Virginian during the alternative country boom of the mid-‘90s, only to slowly drift away into more ambiguous waters. Each album she has produced since then has slowly altered her songs, but always seems like such an organic, subtle change that it just sounds like a natural progression. The music that Case produces these days is certainly not country, but nor is it pop or even definitively rock. Her newest album The Worse Things Get, The Harder I Fight, The Harder I Fight, The More I Love You doesn’t clear that up in any way, but it may be the singer’s most concise, direct album of her career thus far.

It has been four years since her last album, Middle Cyclone, but it feels much longer. Since 1997, Case has produced an album on a three year average, but while Middle Cyclone had several solid tracks (including the gently raging “This Tornado Loves You”) and a badass cover, it ultimately felt overlong at a 73 minute runtime and a weaker latter half. Regardless, it was Case’s most successful album yet, hitting #3 on the US Billboard chart. According to recent interviews, Case experienced severe depression after that high, especially after the death of several family members and developing an aversion to most forms of music. If viewed as a response, The Worse Things Get is even more remarkable. While her previous albums were filled with harrowing short stories in musical form like “Margaret vs. Pauline” and skewed country songs like “I Wish I Was the Moon,” the songs on her newest albums seem to reference her own life and experiences more directly than ever before.

“I’m From Nowhere” references the rigors of touring life and the tension of show promoters from failed bands with “Past armies of them who once played in a band/ And wasted it like a trust fund kid/ Paying you play here while they hate you because of it/ They say I’m lucky to be here, but I’ve been driving for 21 days.” From another singer, it could sound spiteful or boastful or even just petty, but Case manages to make it sound tired and gently sorrowful. On “Nearly Midnight, Honolulu,” she recites a tale of seeing a child at a bus stop cursed out by its own mother; nearly a cappella, the song could either be fiction or a memory, but either way it’s harrowing and tragic. “Where Did I Leave That Fire?” is the emotional crown of the album, beginning as a shadowy, echoing pulse, nearly like the opening credits of a horror film, until a delicate piano enters and Case intones, “A chill ran through me/ And I grabbed on tight/ That was when I left my body for good.” It’s a fascinating look into depression, expressed in chillingly cold, beautiful drumbeats and cascading piano.

But The Worse Things Get is not wholly a downer of an album. Its first single “Man” may be the purest pop single that Case has ever released as a solo artist, sounding more akin to her work with the New Pornographers than ever before. Over a fuzzy guitar courtesy of M. Ward and a pounding rhythm, the singer belts out the declaration, “I’m a man” over and over, calmly amending it with “I’m not the runt of the litter/ Fat-fingered bullies were no match for me/ I still taste them in my teeth” and “If I’m dipshit drunk on the pink perfume/ I am the man in the fucking moon.” It’s Case at her most ferocious, sounding more charged and melodically aggressive than ever before. Album closer “Ragtime” is more laidback but no less gorgeous, with Case singing over a “Sweet Jane” style riff; it sounds almost peaceful, until fanfare rises and builds again and again, never blotting out the singer’s multi-tracked voice. It’s so dramatic and full of crescendos, you can practically feel the National working out their cover already.

The Worse Things Get may not be a definitive album for Case like the country noir of Blacklisted or an artistic breakthrough like Fox Confessor Brings the Flood. It’s not even a comeback album, as Middle Cyclone was a success in any reasonable sense of the term. But it’s Case at her tightest as a songwriter and a singer, without any weaknesses or leaden tracks on the whole album. She explores a whole range of sounds on her newest album, while still sounding familiar and powerful, even when describes her exhaustion and despair. After four years, it’s good to have her back.