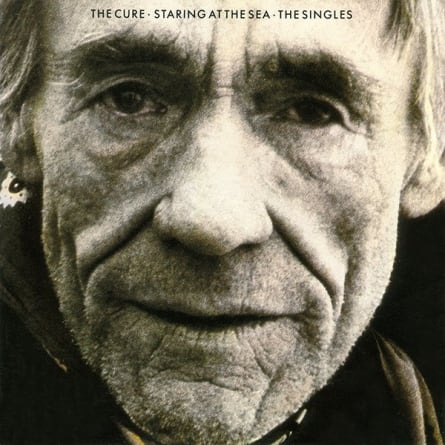 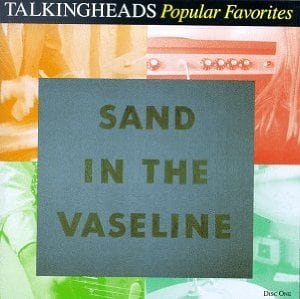 “This ain’t no Mudd Club/ Or CBGB,” though Sand in the Vaseline is virtually as authentic as any performance Talking Heads ever put on at their old Manhattan haunts. In fact, that lyric is even delivered in a live cut of “Life During Wartime,” one of two live tracks that kick off this crucial collection’s second disc. The band split in 1991 and this greatest hits double-disc dropped a year later. The collection captures Talking Heads at their most accessible with “Crosseyed and Painless,” “Psycho Killer” and “Burning Down the House,” while also offering up rawer stuff in newly recorded tracks “Gangster of Love,” “Lifetime Piling Up” and, most notably, the shifty and saucy unreleased demo “Sugar on My Tongue,” which leads off the whole collection. Sand in the Vaseline is both gritty and smooth, a best-of that captures the complete Talking Heads, and makes for a killer soundtrack for a wild, wild life. – Josh Goller 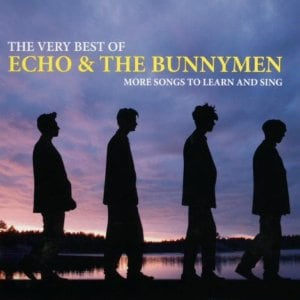 19. Echo & the Bunnymen – More Songs to Learn and Sing

This goes beyond ‘80s nostalgia—this collection highlights the quality of the craftsmanship of these songs and transcends that one-hit-wonder decade. More Songs to Learn and Sing highlights some of the band’s more recent tunes that still evoke that emotive, pretty guitar that you may have missed since the ‘80s. Breathy vocals and upbeat tempos (but with a sinister macabre feeling) pervade their music from the last three decades, making this collection accessible to those who want to chill out with a glass of wine, read a book or dance at a nightclub. Echo & the Bunnymen are one of the most accessible ‘80s alternative bands, and More Songs to Learn and Sing is a fantastic introduction to their entire catalog that will have you combing through Goodwill’s vinyl section for more. – Cedric Justice 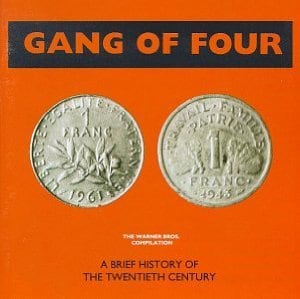 18. Gang of Four – A Brief History of the Twentieth Century

Gang of Four was one of the great acts of the post-punk era, an unlikely blend of dub space, driving funk bass and Andy Gill’s splintered guitars (one of two players, along with PiL’s Keith Levene, for the proliferation of the adjective “angular” in music), all put in service to forthright but cheeky political lyrics on topics ranging from distorted history to love. Most impressively of all, the band somehow forged all of this together into exquisite pop numbers that were driving and danceable but also teeth-rattling. The tunefulness of the music means little is lost in translation with this compilation, even if you don’t get some essential cuts like “I Found That Essence Rare” or “Contract.” Even so, the compilation gathers a good chunk of their classic material on the first two LPs, and it does the noble service of rescuing the handful of worthy tracks from the band’s (for want of a better term) later days. That the whole compilation covers four years’ worth of recording is a testament to the crucible of post-punk, in which a band could travel a full career arc from earthshattering innovation to sellout tedium in a period that only hit double-digits if measured in months. – Jake Cole 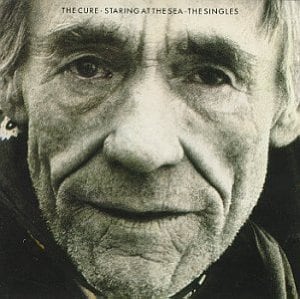 While goth-rock progenitors the Cure have long been known for their epic sadness and Robert Smith’s gloomy image, their collection Staring at the Sea shows the band from their roots as post-punk aesthetes to the beginning of their most pop-oriented years. Entitled Standing on the Beach on its original release, the expanded CD version collects standout tracks from the Cure’s career all the way from stark, wiry debut “Killing an Arab” to the lush pop of “Close to Me.” It blows away any image of the band as a bunch of guys in makeup standing in the darkness; the tracks on Staring at the Sea show a band that varied between muscular rock on “Jumping Someone Else’s Train” to the chilling grandeur of “Charlotte Sometimes” to the cheeky “The Lovecats.” It’s a perfect compilation for a band far more expansive than they’ve commonly given credit for. – Nathan Kamal 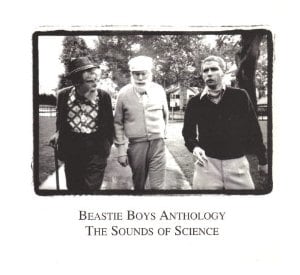 If you’re looking for the Beastie Boys’ most well-known hits for your next ruckus rumpus get-together, scoop their 2005 compilation Solid Gold Hits. But if you’re looking for the full enchilada on one of the most diverse, eclectic and innovative groups of the 20th century, go with their 1999 collection The Sounds of Science. Released the year after they dominated the charts with Hello Nasty and the crossover smash “Intergalactic,” the anthology helped educate a generation of fans who may not have even been alive for the group’s first or second waves as to what masters of the craft they were dealing with. From their early singles, which hadn’t yet seen an appearance on the CD medium like “She’s On It,” to their more colorfully obscure bootlegs to their biggest and best hits, it’s an ideal introduction, refresher course and taster’s choice of the group’s catalog all rolled into one. With the Beasties’ web-of-the-world style, The Sounds of Science also works as a journey through 14 years of popular music and pop culture as interpreted by three New York geniuses. – Chaz Kangas 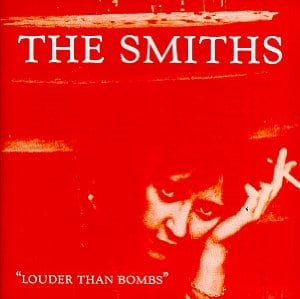 15. The Smiths – Louder Than Bombs

When the Smiths were the darlings of the college circuit, when friends carried around import 12″ singles with cool graphics that held within their fragile sleeves the whinging laments of Steven Patrick Morrissey, I hated them. I could hear the beauty in Morrissey’s voice but could not abide his cadence. It was years before I could hear past Morrissey to the music that grounded the band: Johnny Marr’s guitar. Then the hooks kicked in. Louder than Bombs collected non-LP singles and B-sides, so this is not their greatest hits—there’s no “The Boy with the Thorn in His Side” or “How Soon Is Now?” here. But it does have “Sheila Take a Bow,” “Shoplifters of the World Unite,” and “Ask,” an anti-shyness anthem whose chorus sums up the Smiths’ appeal: “It’s the bomb… that will bring us together.” Anxious, sensitive mixtapers and bucktoothed girls from Luxembourg, unite! – Pat Padua 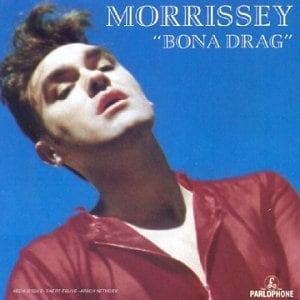 After the acrimonious dissolution of the Smiths, Morrissey was expected to just kind of fade away. After all, common wisdom said that guitarist Johnny Marr was the real talent of the group, and Moz was just a mopey guy with limited range. His immediate explosion of classic songs, collected on Bona Drag, must have shocked more than a few critics into silence if not into hasty retreat. The bizarre humor of “Hairdresser on Fire,” the epic gloom of “Everyday Is Like Sunday” and the Kray brothers-inspired “The Last of the Famous International Playboys” are slices of Morrissey at every end of his talents, without even going into the adolescent angst of “Suedehead” or the lacerating “November Spawned a Monster.” Bona Drag contains only a segment of Morrissey’s long career, but it shows him at his most inspired. – Nathan Kamal 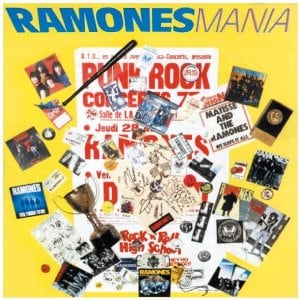 How the hell did these guys get together? A shared stage name couldn’t gloss over their differences: an introverted, anti-frontman who could barely sing, a hard-minded, super-conservative rhythm guitarist, an assertive bass player torn between ambition and drug addiction and a progression of drummers. Their first “best of” album, Ramones Mania, is the essential collection that shows how they managed to mesh and create something deep and powerful out of simple repetition, celebrations of ignorance and lyrics reflecting the underbelly of society.

It’s not important whether the Ramones deserve credit for founding punk rock in America and kick starting it in the U.K. Their personalities and in-fighting are irrelevant. All that matters is the way they could distill id and angst into a potent mix of breakneck tempo, barely coherent lyrics and snarling guitar that every teenage boy (or inner teenager) intuitively responds to. “I Wanna Be Sedated,” “Blitzkrieg Bop,” “Beat on the Brat”—these songs defy their original era and channel the jumbled headspace of youth, whether it’s a distant memory or the current moment. – Jester Jay Goldman 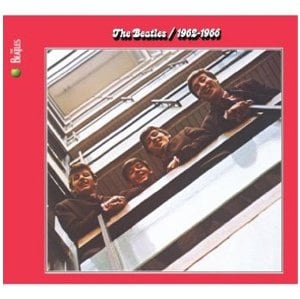 Though the sales figures probably don’t entirely back this up, there seemed to barely be a respectable record collection in the 1970s that didn’t reserve a prized spot for the simultaneously released Beatles collections 1962-1966 and 1967-1970. The red and blue covers beckoned with the iconic images of Liverpool lads peeking over a stairwell railing in EMI’s London headquarters, first shot in 1963 and then recreated with far scruffier men in 1969. Even with every proper Beatles LP already on the shelf, there was something special about having these double album sets, tracking the rapid, culture-shifting evolution of the band. The sweep of the group is made clear by the sweet simplicity of collection opener “Love Me Do” sharing the same piece of vinyl as Paul McCartney’s “Yesterday” and housed within the same gatefold sleeve as astonishing tracks from Rubber Soul and Revolver. And that’s mere prelude to the batch of later songs, which are both improbably sophisticated and wildly diverse (the goofy “Octopus’s Garden” leads directly into the stately “Let It Be”), putting nine years of transformational creativity—not even a full decade!—across four stellar sides. – Dan Seeger 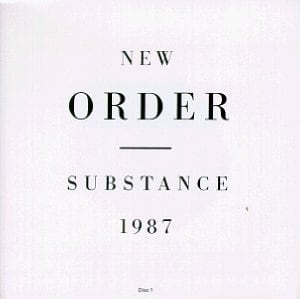 New Order’s Substance was released before the Joy Division collection of the same name. Indeed, the success of the New Order compilation probably stirred to life the notion of releasing the collection from their progenitor band not quite a year later. I know that as a fact, but I never think of it that way, always considering the New Order comp as an answer to their own history, a statement of having moved on. Though the band continued—even artistically prospered—afterward, Substance represented a decisive statement that the remaining trio completed their collective reinvention in the long wake of Ian Curtis’ suicide, a process that involved immersion in serious Italo-disco until they themselves could construct precise, propulsive dance music. Whatever previous material didn’t quite live up to that mastery was reworked, with new definitive recordings of “Temptation” and “Confusion,” a slightly later take on “Ceremony” eradicating the first pass (which was also the first recording under the New Order name) and other tracks edited into better, sharper versions. The legacy of Joy Division would only continue to grow, but New Order makes a firm argument with Substance that they’re deserving of a separate, equally exalted stature. – Dan Seeger