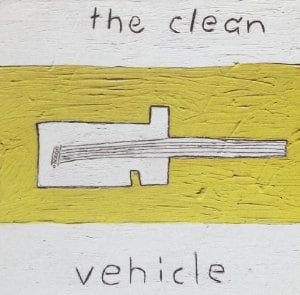 [xrr rating=3.25/5]To American ears, it wouldn’t be a stretch to perceive Visions, the debut LP by New Zealand band the Clean, as an anachronism. Released in 1990, nearly a decade after the group’s first single dropped, it was sandwiched in-between the ‘80s underground and the rise of grunge and alternative rock. With the 2013 reissue, though, the album oddly sounds more contemporary than ever, fitting firmly amid current prevalent indie tropes. So modern does the record sound, those ignorant of the Clean’s back story may mistake them as a new band, adhering to the indie pop-rock formula they themselves helped create.

On Vehicle, the Clean anticipate the dominance of what indie rock would evolve into. Through a decidedly lo-fi production, the trio blend angular guitars, quirky instrumentation, a generally insouciant attitude that can abruptly shift into sincerity and hooks that reveal themselves only on repeated listens. In retrospect, the record sounds like a mixture of the past (Big Star, Television), present (R.E.M., Pavement) and future (the Shins, Wussy).

Opening track “Draw(in)g to a (W)hole” begins with an airy, melodic guitar sweeping along as the drums quickly increase in tempo. Come the pre-chorus of “I looked into your eyes/ And you looked into my mouth/ You said something,” the music slips into a more frenetic pattern that only grows in energy in the refrain of the repeated title. It’s one of the record’s strongest tracks, an obscure indie classic begging for a resurgence on today’s equivalent of college rock stations. On the second track, “I Wait Around,” one of the Clean’s strongest attributes manifests, namely that the three members — guitarist David Kilgour, drummer Hamish Kilgour and bassist Robert Scott — rotate lead vocal duties, giving an automatic variety to their presentation. This is almost a necessity, as the album’s components can get very limiting and make the songs same-soundy otherwise. That said, it’s Scott’s voice that takes center stage on “I Wait Around,” the Kilgour brothers harmonizing behind his clear pipes and the discordant guitar tonalities. The song also introduces the common theme of relationship troubles and love complications, at times sentimental in their lyrics, but never dour musically.

That contrast is exemplified in “Bye Bye,” all bouncy organ notes and the sweetly harmonized title standing in as the chorus. The piece has a surf rock flavor in its bass line as well, adding the sunny atmosphere to a song about bidding a loved one a temporary adieu. Even the most caustic song lyrically, “Some One,” is buoyed by a driving propulsion, infectious with its sidewinding rhythms when biting lines like, “It’s hard to feel any movement/ When you’re aware of all you lack” invite the tune to be just as harsh. Comparable highlights are the sing-along “Big Soft Punch,” on which David Kilgour sounds like he’s pulling the strings from his guitar, and the staccato surge of “Diamond Shine.” Softer acoustic numbers, like the start-stop “Home” and the vacillating light and dark textures of “I Can See,” showcase a more whimsical side, charming in that they come across as broad brushstrokes rather than fully formulated songs.

As mentioned above, while some of the tunes can be mistaken for each other, the fact the album is so short — only two long are longer than three minutes — keeps this from seeming too big a disappointment. Attached with the album proper, though, is the five-song EP In-A-Live, displaying more diversity than Vehicle alone conveys. Thus, while reissues are typically little more than cash grabs aimed at devoted fans, Vehicle wholly deserves such a second chance to break it to a new audience that will give its forecasting some due credit.