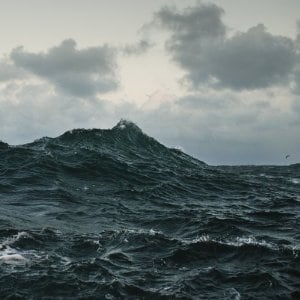 Volcano Choir is Justin Vernon’s collaboration with past and current members of Wisconsin band Collections of Colonies of Bees. Repave is the ensemble’s second album, and it’s the first to truly capitalize on the latent potential of those two acts teaming up. While Collections of Colonies of Bees specializes in ambitious instrumentals and post-rock experimentation, Vernon’s vocals are his most interesting musical feature. Repave utilizes those respective strengths in the most logical way possible—letting Vernon stretch the capabilities of his voice, while his Volcano Choir bandmates focus on rendering backdrops that support and enhance those standout performances.

Despite claiming no songwriting credits, Vernon is a much more overt presence on this second effort than on 2009’s Unmap, his vocals a dominating force as much on these new Volcano Choir tracks as on a joint from Yeezy. His parts are evocative in any register, and Vernon stretches himself well beyond the keening and vocoder effects of those more assertive takes on Bon Iver. “Acetate,” “Comrade,” “Alaskans” and “Dancepack” all feature stretches where Vernon sings in a seductively growled lower register (“Alaskans” bouncing between falsetto and baritone), a side of his voice that rarely gets the play it deserves. And “Acetate” builds to a boisterous, arena-sized anthem delivery, Vernon belting out “Shout it/ say it louder now.” It’s easy to imagine fists held to the sky while an act like Coldplay does the honors.

Guitarist Chris Rosenau and drummer Jon Mueller charge the whole affair with a sound that invokes the grandeur and sheen of Bon Iver, but is wholly the work of a very different band. The refrain on “Comrade” is a particularly overt example, the aesthetic specter of Bon Iver’s “Calgary,” “Perth” and “Wash.” yielding to a strobe-light guitar maneuver as Vernon’s voice soars before plunging back down to churning waters. Volcano Choir’s instrumentalists work in minute, textural details, and the unexpected directions these songs take are often more compelling than the scene-stealing vocals.

Repave also shows a side of Volcano Choir that loves big, swooning songs like “Byegone,” a track that features the guy who whispered, “I am my mother on the wall/ With us all” leading a whole band yelling out “Set sail!” Yet Repave also utilizes the woody organic tones of For Emma, Forever Ago and doesn’t shy away from lyrical oddities that fit right in Vernon’s canon. There’s the occasional electronic flourish—namely the multi-tracked repeating vocals at the end of “Almanac” and the synth part that flutters around opener “Tiderays”—but Repave manages to occupy a place somewhere between Vernon’s two albums despite consistently honoring the bold sensibilities of Bon Iver. While Unmap only hinted at what Volcano Choir can achieve, Repave actually pulls it off.