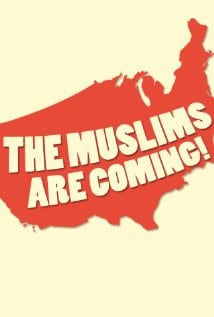 [xrr rating=3.0/5]What is a Muslim? It may sound like a rhetorical question, and one whose literal answer is easy in the extreme; a Muslim is simply a follower of the prophet Muhammed and an adherent of the Koran. In practice, it’s a much more complex question of religious belief, orthodoxy, nationality, ethnicity and politics. In the last few decades, the Islamic faith has become a hot button topic in America, where almost no conversation about it can be separated from political rhetoric and the issue of terrorism. The Muslims Are Coming! isn’t afraid to directly state that there is a strong agenda in the United States to paint Islam as an extremist, primitive culture with direct designs to impose brutal Sharia law on people of all creeds. But Negin Farsad and Dean Obeidallah, the co-directors of the film, are determined to do so via humor.

Both Obeidallah and Farsad are standup comedians as well as Muslim Americans, and, as they point out in the first few minutes of the film, are dismayed at the relentless way in which they are marginalized by the media and popular culture. In response, they put together a tour featuring themselves and other Muslim comedians, traveling through areas like the Deep South and Utah. Along the way, they attempt to engage with populaces who have perhaps never met a Muslim in person by performing free shows featuring comedic activities like “Name That Religion,“ wherein they quote scripture and challenge pedestrians to state whether it originates from the Koran, the Old Testament or the New Testament. Intercut between footage of these performances, various talking heads (including Jon Stewart, David Cross, various Islamic clerics and even a Congressman) discuss the aspects of Islam most seen in popular media. There’s also a tendency to use cartoony, fake infographs to convey statistics (often admittedly anecdotal or made up) that borders on grating, but mercifully diminishes as the documentary goes on.

For the most part, The Muslims Are Coming! is successful in bringing a light touch to a tricky topic. Throughout the film, Obeidallah and Farsad challenge the notion that the Islamic world as a whole is a barbaric, backward-thinking culture, attempting to get across the notion that millions of Muslims throughout America are simply people living their lives like anyone else. While Farsad tends to dominate, in both screen and stage time, she has a winning presence and ably communicates both her frustration and her willingness to reach out; the other comedians, like Aron Kader and Preacher Moss, don’t get more than a few minutes of time themselves, which subtly highlights the movie’s real flaw.

While it’s understandable that the filmmakers want to focus on the positives of their message, there are subtle indicators that the rank and file are not always on board with their interpretation of what it is to be a Muslim American, which adds a level of ambiguity to a complex subject considerably more nuanced than their an “Ask a Muslim” booth, but doesn’t have quite the comedic panache. The Muslims Are Coming! will hopefully intrigue at least a few viewers to challenge popular media, but it does it in a fairly one-sided way itself.