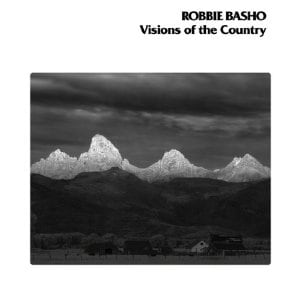 [xrr rating=3.75/5]For Robbie Basho, the guitar was a paintbrush every bit as much as it was an instrument. Through various open tunings and an influence rooted in Indian classical music he demonstrated not just a virtuous connection to the steel-string guitar, but also to nature. Leveraging the raga style of Hindu music, Basho successfully used his guitar to visualize the wilderness, sketching the running of water, the ferocity of a charging animal, the reach and power of a mountain.

Basho is often associated with a pair of similarly virtuoso acoustic players, John Fahey and Leo Kottke, both of which found and continue to find more widespread notoriety than Basho. With the reissue of his 10th album, 1979’s Visions of the Country, which has been out of print for over 30 years, that likely won’t change all that much. Basho’s music is not as approachable as that of his counterparts (though the gorgeous instrumental “Variations on Easter” is described as a tribute to the work of his buddy Kottke), as his use of obscure modes and his chant-like voice (almost a cross between Antony and Israel Kamakawiwo’ole) tends to skirt any sort of beaten path. The adventure these songs bring, however, makes it worthy of a left-of-center trip.

Within every Basho song there is movement, as if changing scenery passes by with each progression. Open strings ring as Basho moves up and down the neck of either a 6-string or 12-string, building tension and setting the stage with gorgeous arpeggios that could turn to dissonant clouds or radiate glorious sunshine in an instant. The tracks with lyrics actually veer a little further out there than the instrumentals, which tend to be more folk-based and concentrated on a theme (see the classical-meets-country-folk of “Rodeo” or the gorgeous “Leaf in the Wind”). That, however, seems to be because Basho has more to say, and not just through words.

For music that strays quite far from the norm, there is a bit of literalness to be taken from it thanks to the colors Basho uses. In homage to Wyoming, “Green River Suite” is built from rustic arpeggios and pull-offs that resemble the flow or a river. After a verse, he picks up the tempo and you can hear his hands screeching furiously, sliding up and down the steel strings. “Rocky Mountain Range,” described by Basho as “a love tryst between man, nature and the almighty,” starts with peaceful, deliberate fingerpicking as the violin of Antoinette Marcus circles around him, with Basho singing, “Oh you grand Rockies/ Rise up for ever/ Rise up in praise/ Toward the sun.” As the pace increases, you can hear the influence of the Sarod, a lute-like Indian instrument, as Basho builds almost to an acoustic drone to seemingly demonstrate the vastness of the landscape.

Basho’s story was bookended by tragedy, the first of which set the stage for the music he’d go on to create prior to an untimely death in 1986 after some experimental chiropractic work went wrong. Orphaned at an early age, Basho became fascinated by Asian art and culture, ultimately changing his name to honor Japanese poet Matsuo Basho. His heartbreaking song “Orphan’s Lament” essentially credits his abandonment as the reason for his deep relationship with the land, saying he roamed because he never had a place to call home. While certainly not for everyone, Visions of the Country will reward those willing to join Basho on what became his life’s journey.