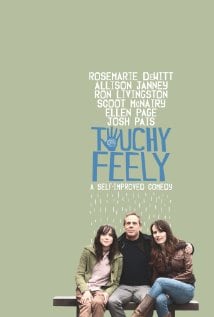 Given that Lynn Shelton’s most famous works, Humpday (2009) and Your Sister’s Sister (2011), are defined by an improvisational looseness, it may be strange to praise the level of focus she brings to them, but that’s exactly the attribute that’s missing in her latest film, Touchy Feely. Shelton’s style has a deliberate ramshackle quality, an embrace of the casual messiness of people interacting. That doesn’t mean she can’t be clear in her purpose, at least in those earlier films. Your Sister’s Sister in particular has many of complicated emotions threading through its story, but it’s also firmly grounded by the relative simplicity of its structure: three characters largely operating in what amounts to a single setting. The stray threads are all right because they’re clearly part of a single well-designed garment, ultimately providing a little charm in the realistic roughness they represent. There’s a level of intimacy that works well with Shelton’s artistic sensibility, heightening her keen sense of how individuals operate when they’re drawn into circumstances that they can’t quite figure out.

With Touchy Feely, Shelton expands her scope, causing a vagueness of both intent and storytelling authority that’s devastating. It’s reminiscent of Nicole Holofcener’s subtly sprawling films such as Lovely & Amazing and Please Give, with several different stories that have tangential connections to each other, but nicely lock together thematically. Unfortunately, Shelton doesn’t share Holofcener’s gift for making disparate pieces cohere. In Touchy Feely, Rosemarie DeWitt plays Abby, a masseuse who develops a professionally problematic aversion to physical contact at about the time her boyfriend, Jesse (Scott McNairy), asks her to move in with him. Meanwhile, her brother, Paul (Josh Pais), is a dentist with a struggling practice who has a sudden surge of business when word gets around that he has a knack for curing TMJ, or at least alleviating the pain of it. His dental assistant is also his daughter, Jenny (Ellen Page), who is unsatisfied with her lot in life, although her dilemma is barely developed at all. It simply emerges whenever Shelton needs another dramatic beat to play with.

Jenny’s underdeveloped storyline is endemic of the problems with Touchy Feely. Where Shelton has previously been able to deeply plumb her characters’ lives, often in collaboration with her actors, her she seems to have only a glancing interest in what drives them. Problems are introduced only to be resolved with the dramatic equivalent of a shrug, and the film is littered with diversions that basically go nowhere, such as Paul’s dalliance with learning the alternative medicine practice Reiki with a teacher (Allison Janney) who was recommended by his more New Age-y sister. Then there’s the third act introduction of one of Abby’s former lovers (Ron Livingston), in scenes that are obviously intended to have a grand emotional weight but instead play out limply. That’s in keeping with the film’s overall lack of impact. The thing is damnably drab, getting bogged down in scenes that play out too slowly. Even Shelton’s admirable attempt to address Abby’s problems with touch in visually interesting ways—for example, probing in close on the crevasses of human skin to make it look almost otherworldly—is finally just dull, as the director lacks the ability of someone like David Cronenberg, who makes compulsive exploration of the intricacies of physicality into an almost tactile part of a film. In Touchy Feely, this is just one more set of scenes that Shelton stages too slowly, with too much detachment from the feelings that should drive them. There’s no lack of ambition to the film, but Shelton has perhaps strayed too far from her own strengths. By trying to do so much, she winds up with a film that doesn’t do nearly enough.