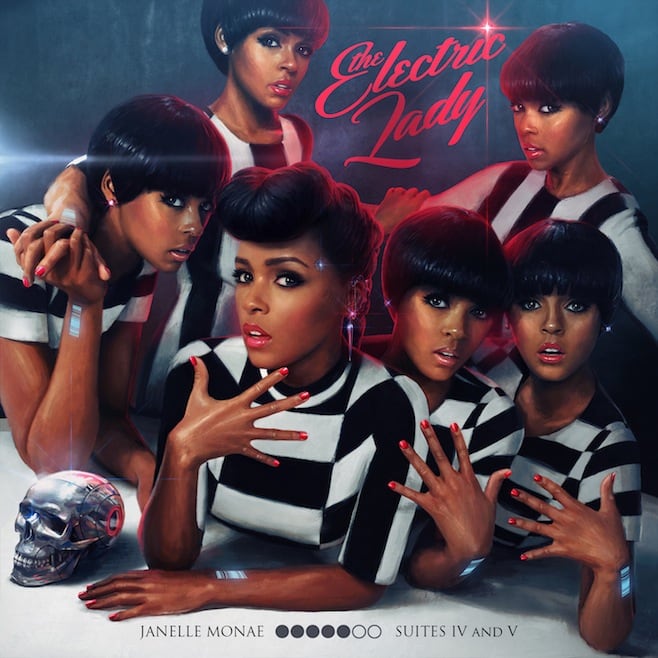 For all the talent that Janelle Monáe commands, and the staggering number of big names willing to herald the arrival of her star, The Electric Lady still might not be a smash success that reaches the wider public. Monáe hasn’t yet developed quite the public awareness an album like The ArchAndroid should earn (though bringing her brand of beautifully feminine androgynous style to Cover Girl cosmetics is a start). When Monáe released the Metropolis, Suite I: The Chase, her funky android alter-ego Cindi Mayweather was on the run and Monáe was still making her name; The ArchAndroid found Mayweather embracing her destiny, and Monáe rising to the occasion in tandem, invoking decades of black musical culture and expanding skillfully on just about every genre she touched. The Electric Lady is Monáe’s powerful answer to the recognition of musicians, critics and fans alike, utilizing her fame and Mayweather’s rise to Electric Lady Number One status in an attempt to address feminism, sexual politics and the contemporary plight of the Other. Split up or taken out of context, the songs here are exceptional and frequently transcendent, but those central themes aren’t fully realized unless the album is taken in its complete form.

Listeners that do so are in for an ambitiously genre-bending, hip-quaking electro-booty celebration. Continuing the loosely detailed story of Monáe’s circuit-blowing alter-ego Alpha Platinum 9000, #57821—on the run and loving on her terms during an era of robotic persecution—The Electric Lady is a force of well-intentioned showmanship, a call for cultural change, and a meaningful answer to those who admired Monáe’s debut yet couldn’t love it as a personal favorite. Monáe announces “March to the streets ‘cuz I’m willin’ and I’m able/ Categorize me, I defy every label,” but The Electric Lady is not an angry, resentful or militant record. It’s a wonderfully euphoric one (going so far as to explicitly condemn robot vs. bounty hunter violence in a skit featuring Mayweather-championing radio station WDRD), celebrating the Electric Lady’s sensual, rebellious spirit, her pop talents (Monáe can sing, dance, perform, speak eloquently, and even rap, all while absolutely owning a unique fashion and style) and her plea for a world where love can be freaky, challenging and beautiful, frequently malleable, and shared freely among all who consent. The Electric Lady is the kind of pop star the people really need, and the kind of pop star Monáe deserves to be.

Following a fine introductory overture to Suite IV (of seven) that parallels the one that opens The ArchAndroid and features a tense spaghetti-western theme, Monáe’s voice rises up and launches into “Givin Em What They Love,” featuring Prince. It’s truly a collaboration, giving both artists at least a verse, with Prince’s slithery backup creating a pulsing backdrop that Monáe rides with her massive vocal presence. Rivaling Prince even for one song is an achievement, and it makes for a hell of a way to start the record. Erykah Badu collab “Q.U.E.E.N.” comes next and it’s equally impressive. The track’s woozy Parliament bounce makes for a neon-lit arena in which both artists deal out alternating moments of lyrical prowess, Monáe even following up Badu’s soulful breakdown with a poised hip-hop conclusion.

Both tracks are heavily focused on the political sexual empowerment so central to The Electric Lady, feminism, gay rights and the implications of color all blurred together under the allegory of human-android love on an album that directly references Sally Ride and Dorothy Dandridge in its song titles. The Electric Lady isn’t just giving “them what they love,” but defining their idea of what can even be desired. This is a performer in command of her image and her sexuality. On “Q.U.E.E.N.” Monáe directly confronts judgment by asking, “Am I a freak for dancing ’round? Am I a freak for getting down? Is it peculiar that she twerk in the mirror?” And, more pointedly, “Am I a freak because I love watching Mary?/ Hey Sister, am I good enough for your heaven?/ Say, would your god accept me in my black and white?/ Would he approve the way I’m made?” But she shines out of that thrown shade, embracing all the ways in which she’s a freak and positioning that outsider status as another defining achievement. She’s not just any android after all.

Again, Monáe and her Wondaland crew have focused so diligently on quality songwriting that the cerebral messaging of The Electric Lady fits in alongside enchanting pop tracks like Miguel collaboration “Primetime” and the unabashedly glowing closer “What an Experience.” Even though the single-potential is higher here than on The ArchAndroid, the guest appearances are telling; Prince, Erykah Badu and Esperanza Spalding are less pop stars than they are popular artists with a literate, powerful voice, and Monáe is proving to be the same. She continues to create with impeccable taste and staggering skill. And while The Electric Lady is meant to challenge those who hear it, it’s an album that sounds cheerful, amorous, and elated, prepared to confront a world of haters, hated and cynics with dizzying abandon, open arms and shaking hips. The Electric Lady has arrived.