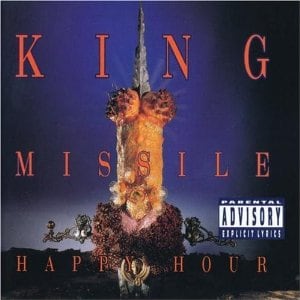 John S. Hall, despite what one of his songs may assert, is not a sensitive artist. His earnest, almost childlike delivery about crass, iconoclastic or just plain absurdist subject matters led Hall’s commercial appeal to reach its peak with 1992’s Happy Hour and King Missile’s biggest hit, “Detachable Penis.” It all began when the avant-garde poet turned frontman, who’d quickly risen from open-mic participant to featured Manhattan poet, wisely declared in 1986 that “20 minutes of [him] reading poetry would be totally boring,” so he brought in his guitarist friend Dogbowl to make his featured readings more dynamic. Once three additional band members—including a xylophonist—were added, King Missile (Dog Fly Religion) was born.

Starting those early years with more acoustic-oriented, ramshackle and often amelodic spoken word vehicles like “Sensitive Artist” and “Take Stuff from Work,” the band developed its cult following due less to its music (the instrumentation of which sounded something like a jokey mimic of mid-‘80s Tom Waits records) and more to Hall’s expert blend of boyish cadence and irreverent lyricism. But Dogbowl soon left the band to pursue his own projects, forcing Hall to regroup with new musicians and the truncated band name of King Missile. The result: a college radio attention-grabber in the more rock-oriented Mystical Shit (1990) that birthed the deadpan gem “Jesus Was Way Cool” and rocketed the album to No. 1 on the CMJ charts.

After the ascension of “Jesus,” King Missile caught the ear of Atlantic Records and the band’s first major label release kept with the satirical religious theme in The Way to Salvation. But it was 1992’s Happy Hour that would mark both the finest hour and beginning of the end for the second incarnation of King Missile. “Detachable Penis,” with its delay-treated guitar riff, earworm vocal loops and deadpan lyrics about the hassles of misplacing a removable member, became a staple of college rock mix tapes over the next decade-plus. It topped out at #25 on the Billboard Modern Rock Tracks chart, and became popular enough that Hall and company started playing it early in their live sets to prompt their many new pseudo-fans to leave.

But, as you’d expect from an accomplished avant-garde lyricist like Hall, Happy Hour offers so much more to love than “Detachable Penis.” The band continued in its progression away from sparse, meandering musical backing and settled into heavier offbeat rock not all that different from Primus, the Dead Milkmen or Ween. This is apparent almost immediately when, after a short intro, the band launches into “Sink.” With soaring electric guitar, a plodding, cymbals-heavy drumbeat and distorted vocals, it’s easy to overlook the fact that the lyrics, which sound grandiose at first blush given the repetition of the word “holy,” are merely having fun with homonyms (the titular sink is actually “holey”).

Happy Hour gets into the meat of its order with “Martin Scorsese,” the far less successful but far more grotesquely hilarious single released after “Detachable Penis.” Opening with rapid hand percussion and the tinkling of a triangle, “Martin Scorsese” quickly slips into a filthy Claypool-esque bassline as Hall drops an F-bomb barrage in his ultraviolent proclamation of fandom for that director with the crazy eyebrows. So hyperbolic is his purported appreciation that Hall shouts, “I wanna…grab his head and suck out one of his eyes/ And chew on it, and spit it out in his face/ And say, ‘thank you, thank you for all your fuckin’ films.’”

But as gloriously ridiculous as a song like “Martin Scorsese” is, there’s certainly some rock-oriented filler in the album’s first half. “(Why Are We) Trapped?” is something of a psychedelic-rock banger, as Hall sings variations of the song’s title from the perspective of a hostage to his unnamed captor. It’s a dark turn, not uncommon for this band, but one that lacks any of Hall’s typical incisive depth. And the fuzzy guitars and frail vocals on “VvV (Vulvavoid)” make the track almost indiscernible from the majority of early-‘90s crap rock. But sandwiched between the two is the fabulous “It’s Saturday,” a spoken word track backed by an aimless drum solo in which Hall echoes the occasional hypocrisy of supposedly nonconformist subcultures as he proclaims, “I want to be just like all the different people,” and he then delves into social commentary about protesting simply because “It’s Saturday, and there’s nothing else to do.”

After “Detachable Penis,” the album continues along darker themes and a rock orientation with songs like “Take Me Home” and “Ed,” and the spoken word tracks and more farcical conceits are fewer and farther between. However, the gloomily-paced “The Evil Children” hits the mark as Hall speak-sings about how the children were evil for disobeying orders to set the dog on fire or leave an elderly woman in the middle of the expressway. But even if the latter tracks are largely less notable, there’s a few other juicy nuggets in the form of “Heaven”—where an idyllic afterlife scene transforms into surreal horror—and the genius absurdity of “I’m Sorry,” as Hall runs down a litany of examples of how his experience is limited by never having done things like taking the pulse of a dying duck, sawing a television in half or letting a cyborg take out the garbage.

But the success of “Detachable Penis” and Happy Hour as a whole (it also topped the CMJ charts) ultimately unraveled the band. After a third Atlantic release, a self-titled record in 1994 that performed poorly, the band split because, as Hall described it, “there was no reason to stay together.” Hall chose to go to law school. Since then, he has returned to music, putting out a solo release and assembling a new lineup. But the new band’s three albums in the late ‘90s and early ‘00s went largely unnoticed. The heyday of weird rock has largely passed (even Ween has acrimoniously split), and the advent of YouTube has led to the more elaborate satirical spectacles of the Lonely Island, “Gangnam Style” and, recently, the Norwegian duo Ylvis getting far more attention from the college crowd than more avant-garde musical fare. But Happy Hour still stands as a landmark of brilliantly oddball songwriting, one that, throughout the decades to come, will likely be as frequently lost and serendipitously found as that pesky detachable penis.