“This town has always had its fair share of crazies; I wouldn’t want to live anywhere else.”

There’s a level of comfort that comes from being taken in by the relationship certain directors have with certain cities, the way Martin Scorsese and Woody Allen make films that feel like New York no matter where they’re set, or how Quentin Tarantino’s characters exhibit personalities that seem like L.A. personified. It’s a symbiotic relationship that seems to be disappearing as our culture becomes less isolated and more global and Richard Linklater may exist alongside Tarantino as one of the last American filmmakers to create works in this fashion.

Though Linklater was born and educated in Houston, his formative years as an artist were spent in Austin, appreciated far and wide as not just the capital of Texas but as sanctuary for weirdoes, lunatics and oddballs the world over. This last point is particularly important when examining Linklater’s works as a whole; though he has routinely been compared to European arthouse auteurs, the way of life and the characters depicted in his films are rooted in the culture of Austin. This is not to understate what influence European filmmakers may have on Linklater but the far larger influence on his work seems to be his adopted city and its own cast of characters.

As Linklater’s first major film, Slacker prominently features the role between the director and his city as well as many of the motifs and themes the director would continue to explore throughout his career. Unlike the ragged appearance of his first quasi-feature It’s Impossible to Learn to Plow by Reading Books, Slacker is impossible to mistake for anything but a Linklater film: it lacks narrative structure, choosing instead to seamlessly flow through a day in the life of the city of Austin and its citizens, who happen to be comprised mostly of conspiracy theorists, freaks, and amateur philosophers.

Linklater’s directorial personality, then, could be said to be Austin’s own identity translated into film. The eccentrics that inhabit the film were drawn from real figures in the community that Linklater knew, strong personalities who would go on to do things like create SXSW (Louis Black) or found Poi Dog Pondering (Abra Moore) or come from bizarre pasts (ex-Butthole Surfers’ drummer Teresa Taylor’s memorable turn as the infamous pap smear girl being the most notable). These very real figures, remarkably, aren’t all that different from the strange fictional characters Linklater would revisit again and again in films like Waking Life and A Scanner Darkly. Similarly, the much-celebrated role of dialogue and casual philosophizing in Slacker is very much a part of the Texas way of life, enabling the film to perform that rare trick of being surreal and realistic. 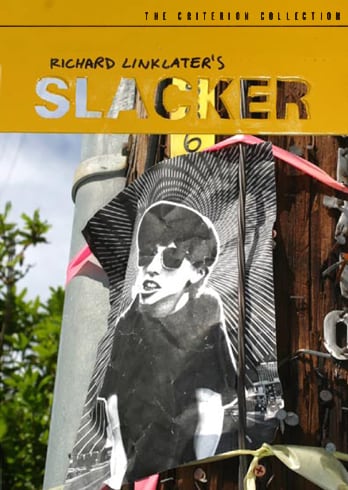 To everyone who lived outside of Austin, Slacker appeared to be on first impression a document of an almost foreign culture; to those within, it was equally strange, a work of cinematic art that elevated their town to the same status of Woody Allen’s New York. Over time, though, Slacker’s influence has come to be its devotion to the individuals that make up a community. The new wave of independent American filmmakers saw in Slacker a call to arms, proof that cinema could be personal again; Kevin Smith and Wes Anderson both cite the work as a direct influence on their own debuts. Unsurprisingly, a devotion to individualism is what unifies most of the characters in Slacker, from the anti-grav conspiracy theorist near the beginning (who seems to predict global warming, strangely enough) to the semi-retired anarchist near its end.

While this trumpeting of the film’s individualist characters isn’t a stretch by any means, it unfortunately misses the bigger picture. What makes Slacker stand out from something like Clerks is the ability of the city of Austin to grant those individual characters a larger sense of self that builds into the city’s distinct personality. Clerks and much of the rest of post-Slacker independent American film, and more recently the mumble core phenomenon, fixate on quirky individual characters that lack a larger community to fit into, creating a short-term facsimile of the Real Thing.

Slacker, by contrast, is able to rely on the large but subtle character of the director’s home to act as a glue that holds the picture together without the need for narrative. Without action, without juvenile humor, without a hit soundtrack Slacker is capable of being entertaining art, acting as a fly on the wall in a very special city. Richard Linklater undoubtedly would have found some kind of success wherever he wound up, but his relationship with Austin made him a gifted, uniquely qualified contemporary auteur.

(This review first appeared on Spectrum Culture at an earlier date)