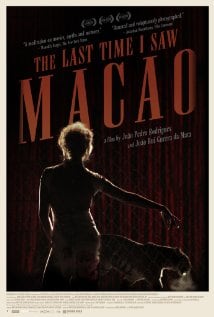 [xrr rating=3.75/5]The first image in The Last Time I Saw Macao is a face, with a zoom toward the pouting mug of drag performer Candy as she sings to the camera, doing a bawdy impersonation of Jane Russell in the von Sternberg/Nick Ray film Macao. It’s a significant moment, since this is the last unobscured face we’ll see for about 20 minutes, and the only real character visage glimpsed throughout. An odd combination of offhand ethnography and nocturnal thriller, this is a film that purposely deviates its gaze from central images toward the things fluttering at their edges—local color and faint hints of danger—forming an aggregate picture of a city in transition.

Essentially a noir composed entirely from B-roll footage, Last Time exhibits a strong commitment to digging beneath standard narratives of place, documenting the lingering after-effects of colonial occupation. Returning to the island for the first time since his childhood, the nameless narrator finds himself immediately involved in some nagging cloak-and-dagger intrigue, arriving after a plea for help from the aforementioned Candy. This all comes after a second prologue, a brief paintball battle that’s free from either paint or any standard sense of spatial coherence, as the directors purposely confuse our expectations of how this sporting skirmish should be presented. Using glimpses of masked men and repeated shots of the walls separating them, the scene is depicted as a war game which, as if in imitation of the old battles it seems to symbolize, suddenly turns real, a shift communicated by a lingering shot of a recently fired pistol.

This murder in turn means peril for Candy, who vanishes soon after the narrator arrives in Macao. Trying to suss out the motives behind her disappearance, he remains bound to this mission more by guilt than interest, and seems equally invested in a different task, attempting to find traces of the sparkling island paradise of his youth. This proves difficult, since most traces of Portuguese influence have been wiped out, to the point where no one even speaks the language. Instead, the former pleasure destination of clubs and casinos has been transformed into a thriving Chinese metropolis packed with ho-hum humanity, with people compressed into grim apartment blocks that make for what’s claimed to be the most compressed population on earth.

There’s a lot to see in this busy world, and the detached Sans Soleil style approach works as both a summation of the film’s themes (direct action as a remote corollary to its quieter, more lasting effects) and a neat way to avoid the difficulty of presenting complicated action realistically. This becomes more evident as the magical realist touches multiply, culminating in a third act which involves a potential Mayan apocalypse and the notion of gangsters transforming into animals. This might be irredeemably silly if shown directly, but presented via the repeated sight of a birdcage covered by a white sheet, placed by a mysterious hand in various locations around the city, it makes for a beguiling bit of imagery. The visual motif of animals, from balloon tigers to dog statues, gets denser as the film progresses, and things seem to be pushing even farther back in time, past ideas of control and conquest to a state of pure natural supremacy, like the mist-wreathed fugue that caps off Werner Herzog’s Aguirre.

But The Last Time I Saw Macao isn’t necessarily about the tolls of colonial dominance, with a clear lack of any overt political statement. This means that the potentially anti-Chinese sentiment put across by a grouchy narrator isn’t part and parcel of the film’s message, which seems less concerned with communicating a specific message about this place than embodying the feelings of loss it inspires. The demands of memory and nostalgia make for a chore in this world, one which always seems to be shifting, creating a hazy, ephemeral image of an island that, in the hands of these two poetic filmmakers, may as well be a mythical place.