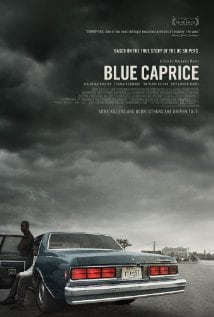 [xrr rating=3.0/5]I remember not wanting to get out of the car. We were visiting my sister in Reston, Virginia and decided to go out for Indian food for lunch. It was October, 2002 and a sniper was on the loose. “Bob and weave,” my mother said, half-joking, half-serious and that we did, darting from the car to the restaurant as moving targets. That’s how absolutely terrified the snipers, who killed 10 people and injured three, kept the Washington, D.C. area for those three weeks in 2002. Now, Blue Caprice, sets out to recreate those tense weeks.

In his debut feature, Alexandre Moore spends more time on the backstory than the actual shootings, creating an impressionistic look at madness rather than take the rote procedural path. In telling the story of John Allen Muhammad (Isaiah Washington) and Lee Malvo (Tequan Richmond), Moore moves beyond the narrow and gives a look at a society where mass shootings in public places are happening more and more. We even have a term for the event now: “active shooter.” It’s telling that the filmmaker offers no solution.

Following a prologue featuring news footage from 2002, Blue Caprice opens a year earlier in Antigua. Here, the abandoned Lee meets John, a charismatic American who has come to the island with his two children, after stealing them away from his ex-wife. Starving and lonely, Lee falls under John’s thrall and follows him back to the United States, where the older man slowly begins to unravel. Rather than fear John’s paranoia and visions of massacre, Lee decides to join him.

Blue Caprice is at its most successful in these opening scenes as Lee succumbs to John’s madness. These sections are more chilling than the actual shooting scenes, which play more like a tacked-on afterthought. John can be equally charming and chilling. Washington, who isn’t a stranger to playing unhinged, disappears into the role with teeth-gnashing relish, his eyes becoming wider with insane anger as the film moves to its inevitable end. As Lee, Richmond has few lines, but the young actor commands the screen with his simmering rage, making it entirely believable that this once scared boy could turn into a remorseless killer. Watching John abuse Lee is difficult, but his blend of tough love, horrible violence and hard-earned affection spurs Lee towards his first murder.

Blue Caprice ultimately suffers because it is impossible to understand John and Lee. The sniper plan is hatched because of hatred for society (and John’s loss of his kids to his ex-wife). But how can we make sense of a senseless crime? Moors valiantly dig deeper, but he is constrained by history. Basing something on truth is more difficult than creating a fiction; I hope we don’t start seeing movies about Sandy Hook and Aurora in the coming years. The drive to understand will push many to Blue Caprice. But the film doesn’t deliver an understanding. It just points out the flaws in those who step out the front door, armed and ready to kill.

As John’s rants push him towards his ultimate, horrific plan, Moors shows us that those around the pair see the warning signs of madness but do nothing to stop them. At one point, John is standing in his friend’s basement, firing off round after round from a high-powered rifle. His friend does nothing to stop him or report him. Are we equally complicit, sitting there in the dark, filled with the knowledge of what is to come and impotent to stop it? Do we want to stop it? Would we feel cheated if Moors didn’t show any of the sniper murders?