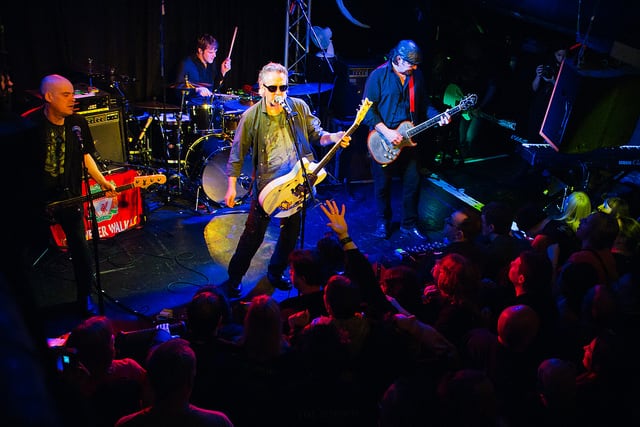 Huffington Post recently ran an article by Dori Hartley where she claimed that Goth is more than a trend, it’s a lifestyle. As three decades wedge between the present and the height of this “lifestyle,” Goth is attracting people who were barely cognizant when In the Flat Field and Disintegration hit the shelves in cassette form. According to Hartley, Goth doesn’t equate the love of vampires. It just means a fondness for black clothes and dark art. We recently ran a list of the Best Goth Albums here at Spectrum Culture and yes, most of them came out in the ‘80s. The legendary Sisters of Mercy claimed two spots on the list while its offshoot, The Mission UK, not only didn’t place, it never came up in our discussions.

The Mission UK was in Portland last weekend, still going nearly 30 years after its creation, touring behind new LP The Brightest Light. And while the band couldn’t pack the house, frontman Wayne Hussey proved that the band could still rock, even if half the setlist eschewed what we consider Goth.

Bombastic and overwrought are generally negative adjectives, but both of these fit in with the best of Goth music. If the Mission UK replicated “Butterfly on a Wheel” over and over, they would have likely produced the best ‘80s make-out ballad. In concert, “Butterfly” was properly aching and served as one of the show’s highlights (along with “Wasteland” and the encore punch of “Deliverance” and “Tower of Strength”). But when Hussey and the band veered away from the more Goth tunes, things felt somewhat dated.

Aside from some odd cover choices (“Like a Hurricane” and “All Along the Watchtower”), some of the lesser songs of the evening smacked of the worst tendencies in ‘80s music. New song “The Brightest Light Comes from the Darkest Place” could have easily been a track off Slippery When Wet and traces of hair-metal (think Poison and Warrant) battled with Goth elements in songs such as “Serpent’s Kiss” and “Garden of Delight.” It just felt too muscular to be Goth, not the type of music for fey boys to weep along with under the cover of night.

Hussey did, however, captivate as frontman, clearly relishing his time on the stage. Songs such as “Beyond the Pale” and “Naked and Savage” were properly melodramatic and the small, yet appreciative audience loudly cheered Hussey and his three backing band members after each and every song.

In many ways, it is comforting that the Mission UK is soldiering on, rocking out into the twilight while so many of their contemporaries have given up the ghost. Peter Murphy played a packed show this year, but he relied solely on Bauhaus songs, selling the past to sustain the present. Hussey and his band are still looking forward and as long as people still carry that Goth torch (whether or not they dye their hair black), there is no reason for them to stop.