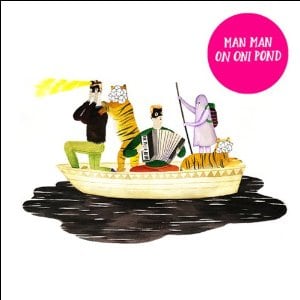 [xrr rating=3.75/5]There really is no other way to say it: Man Man is a weird band. Their records are a soundtrack to your daydreams and nightmares. They paint their faces (their shows are kind of like attending a circus.) Their music is hard to explain, experimental: tight and loose at the same time. They tie you up and hold you hostage. Chaotic, complex and twisted, they are Man Man.

This Philadelphia band has been around just shy of a decade. On Oni Pond is the band’s fifth record and their third on Anti-. Usually writing alone, Honus Honus (aka frontman Ryan Kattner) wrote On Oni Pond with drummer Pow Pow and producer Mike Mogis. The collaboration shows. The record’s natural state is percussive, moving in every way possible: sideways, up and down, telling lateral stories, sometimes moving backwards and of course, in loop-de-loops.

On Oni Pond showcases Man Man’s miscellaneous expertise. The dub on “King Shiv” will have you neck dancing while subliminally questioning your reason for being. “Loot My Body” reminds you why you showed up to a Man Man record in the first place – “Feel free to loot my body/ Just take whatever you want.” And when the horns come in at the end, they’ll jerk your knees to sway.

“Deep Cover” finds its way into movie soundtracks (I’m sure of it) with layered vocals and ukulele; the simplicity of this song shows and tells. From rattling bones on one track to breaking hearts on the next: “Deep cover/ It’s not a place/ It’s a state of mind/ To have your heart go incognito/And hide away for a while.”

“Fangs” will spin you around while the horns jab at you and the drums weave up and down your spine. And if that doesn’t do it for you, the story will leave you feeling eerie: “She hides her fangs/Behind her back/ She slips/ The nail when no one’s watching/ Pretends to laugh/ At the box she’s been born in/ She hides her fangs out in the open.” Such strangeness – along with perfectly dissonant radio single “Hold On” and surf rock-inspired “Sparks” – is proof that Man Man is almost entirely a separate entity from rock music. They will yell at you to follow your dreams, they’ll tell you to be who you want to be, to be sure of yourself. They’ll remind you, as on the closing of “End Boss,” that “If you won’t reinvent yourself/ You can’t circumvent yourself.” It’s that simple.

On Oni Pond swallows you up, spits you out and sets you free. Introspective and innovative, Man Man has made it into a “Life Fantastic.” And lucky us, it just keeps getting better.