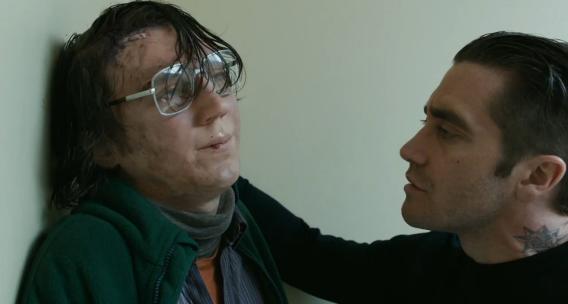 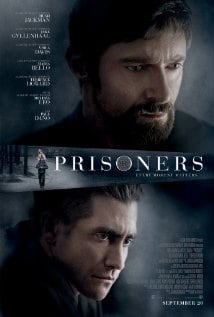 Now that M. Night Shyamalan is more or less out of the picture, another director can ascend who thrives on the twist ending. The shocking revelation at the end of Denis Villeneuve’s Incendies deep-sixed an otherwise strong picture and a similar problem dogs the director’s Hollywood debut, Prisoners, a movie so well-made that its multiple plot holes and logic gaps don’t become apparent until long after the lights come back on.

Like Incendies, Prisoners revels in depravity and the depths to which desperation, fear and longing can send a human being. The Quebecois filmmaker takes his time here – the film clocks in at nearly two and a half hours, lurching forward even as the script launches one unpleasant red herring after another in our direction. The film begins on a rainy Thanksgiving when Keller Dover (Hugh Jackman) and his family are celebrating with their neighbors (Viola Davis and Terrence Howard). The holiday idyll is soon shattered when the youngest daughter of each family vanishes, potentially whisked away by the driver of a sinister-looking RV that had been parked in the neighborhood. The vehicle is soon located by the police (led by Jake Gyllenhaal’s Detective Loki), but the girls are not there. Instead, the police apprehend its driver, a man-boy named Alex, played by Paul Dano. Without the proper evidence, the suspect is turned loose and Keller decides to take matters into his own hands.

Jackman turns in a simmering performance as a father pushed to the limits by rage, but Gyllenhaal is ridiculous as the master cop who has never left a case unsolved. We never learn anything about his character, and the striking tattoos on his neck and knuckles are nothing more than decoration for this vapid character. Like the similarly dunderheaded Mystic River, Prisoners is self-important even when its strong direction can’t cover up its ridiculously contrived plot.

After Alex is released, Keller kidnaps and tortures him, convinced that he knows the whereabouts of the missing girls. He cannot see beyond his rage, and, like Clint Eastwood’s film, Prisoners doesn’t really take the time to question the moral quandary of taking justice into one’s own hands. But this is not Death Wish. Villeneuve does not stage the violence as a revenge fantasia for us to cheer. Even when Keller entreats his neighbors to take part in the torture, Villeneuve and screenwriter Aaron Guzikowski make Keller’s rage and his actions seem justifiable.

Even more concerning is the lack of depth to Gyllenhaal’s Loki. For a detective with such a good track record, it is astounding that Loki is unable to solve the crime. In fact, he may be the worst film policeman in a long time: he lets letting numerous suspects get away, blows his cover while tailing a suspect, and is unable to decipher a clue that is as plain as the nose on his face. Gyllenhaal infuses his character with odd tics (like incessant blinking), but we never learn a thing about him. Not that it really matters. When the motive finally comes to light, it doesn’t make much sense anyway.

Villeneuve’s direction saves Prisoners from falling into Alex Cross drivel. Like in Incendies, he knows how to keep a story moving and make us long for the truth. Some of the scenes here are downright chilling, especially two impeccably mounted ones where one suspect breaks into the homes of the victims. Villeneuve has not completely forsaken his art-film tendencies despite making a Hollywood film. Unlike the great The Silence of the Lambs, however, Prisoners is a not a chiller that stays with you for days after. It’s more like cut-rate Hitchcock, filled with scares and MacGuffins that seem important at the time, but really add up to a whole bunch of nothing.