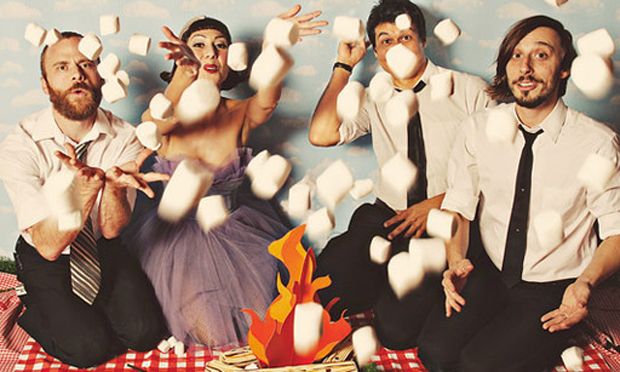 At their recent stop in Portland, the Octopus Project stayed true to their name and appeared in a tight crevice of a venue and put on a breathtaking color-shifting display. Their experimental brand of instrumental art rock (often referred to as indietronica, but labels are rather futile with psychedelic-tinged electronic music such as this) wasn’t bad either. The cozy Mississippi Studios, in one of Portland’s hipper, off-the-beaten-path neighborhoods, played host to this prolific yet still relatively obscure Austin-based foursome who appeared to feel right at home in advancing the city’s self-proclaimed mission (one actually based off an Austin slogan) to “Keep Portland Weird.”

Opening act Paper Lions? Not so much. While they played a fine stage-warming set of hook-heavy indie rock—and drummer David Cyrus MacDonald was rather mesmerizing to watch with his blurring drumsticks and flopping ‘90s haircut—lead singer John MacPhee’s incessant, vain attempts to get the notoriously unexcitable Portland crowd (in a less than half-full venue with a max capacity of 300) to clap or even sing along cast palpable awkwardness over an otherwise solid performance. Despite showing promise, it was obvious these Canadians were out of their element.

The sparse crowd filled in more by the time Octopus Project had set up their gear and begun their set. I knew going in that they were known for visually stimulating live performances, but I wasn’t prepared for the level of artistry and professionalism they would bring to Mississippi Studios. Such an intimate venue (one with large vintage rugs spread across its main floor and a cozy décor including a row of creatively painted decorative bass drums and lamps dotting the stage’s backdrop) typically doesn’t easily lend itself to light shows. But the Octopus Project’s twin octagonal projector screens—with the psychedelic eyeball cover art from their latest album, Fever Forms, serving as a centerpiece—fit snugly on stage and allowed for some of the better trippy imagery I’ve seen this side of Portgual. The Man.

As expected, the band relied heavily on the new album that the tour is promoting. But once the driving digitalized beat and crunchy guitar of opener “The Falls” hit, the set unfurled into a kaleidoscopic sensory experience that made song titles almost seem pointless. With the band silhouetted in darkness in front of captivating visuals, lone female band member Yvonne Lambert still remained striking with her flip haircut curling upwards at its base in a shape not unlike the band’s namesake cephalopod. The individual band members cycled through their many instruments (often swapping positions on stage from song to song), but the most interesting aspect of the entire show was Lambert’s use of the Theremin. While higher energy songs, such as “Mmkit” or the accessible indie pop of “Whitby,” may have gotten the crowd moving, it was Lambert’s curled hand oscillating inches away from the Theremin’s upright antenna that made me want to stand motionless and stare in wonder at that amazing instrument played without touch.

Despite regularly putting out quality records for over a decade now, the Octopus Project has yet to become anything near a household name. Such is often the fate of instrumental bands, wildly inventive and talented as they may be. But it’d be challenging to find a more entertaining offbeat act to entrance you for an hour or so in a small space on a random Tuesday night. The Octopus Project delivered a sonic Tilt-A-Whirl that had me leaving the venue happy, visions of Theremins dancing in my head.