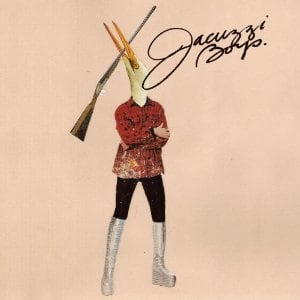 [xrr rating=2.75/5]For a genre of music literally named after guys just kicking it in a carport, garage rock has had some long legs. In the last decade, the sound of fuzzy amps and reverbed guitars in short, punchy songs has been revitalized, spawning notables like Wavves’ Nathan Williams and Ty Segall. Although they’ve been around since 2007, the Florida trio Jacuzzi Boys have only recently been picking up steam, just in time for their self-titled third full length release (and second for Hardly Art) to be released. After a slew of 7” and joint releases in the last six years, it’s clear that Jacuzzi Boys is the work of three guys who have been honing their craft the old-fashioned way, through relentless touring and work.

Does that translate into something worth listening to? The answer is: mostly. The trio of guitarist/vocalist Gabriel Alcala, bassist Danny Gonzales and drummer Diego Monasteri are working in a field that by definition has severe limits on the kind of sound that can be produced. Although power trio enthusiasts may disagree, there are only so many variations on what can be produced by the sacrosanct guitar/bass/drum trinity, and Jacuzzi Boys are entering into a saturated genre. For the most part, Jacuzzi Boys avoids traditional guitar riffs, letting melody and a balance between the three instruments carry the 11 tracks on the album. While producers Jessica Ruffins and Bill Skibbe (as well as mastering by Kramer) manage to vary the sound from song to song with subtle keyboards and well balanced mixing, it’s clear that Jacuzzi Boys work off a template for the majority of their album.

And it has to be said, it’s a pretty good template. “Over the Zoom” marries a Gary Glitter drum stomp to a hazy, stretched out guitar line for maximum effect, sounding both badass and endearingly laid back at the same time. “Hotline” restrains Alcala’s guitar to simple, ringing riffs for the majority of the track, letting the bass and drums create a wiry, nervous atmosphere. On the other end of the spectrum, album highlight “Dust” slows things down considerably, with ethereal keyboards complementing the guitar and Alcala and Monasteri harmonizing in some of their best vocal work on the album. Closer “Ultraglide” also utilizes Monasteri’s voice as a counterpoint to Alcala’s mostly thin vocals over a druggy, slow rhythm until the fuzzed out guitar kicks back in to break things up.

Jacuzzi Boys is a big step up for the trio in terms of sound quality and accessibility, but there’s still some way for them to go. While their songcraft and performance chops are undeniable, there’s not enough to set them apart from their peers in the latest sunny garage-revival boom, at least not yet. But if they can make another leap like this one in the future, there sure will be.