August 15, 2020
Home Books Ninety Percent of Everything: by Rose George 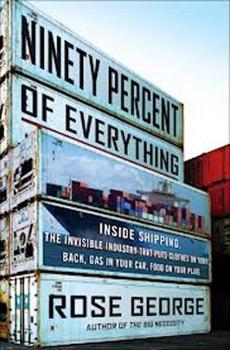 [xrr rating=3.0/5]Take a simple inventory of everything on your person right now. Now stop and think about how all of it got from its point of origin to your back. By rail? Nope. Airplane? Not likely. Most everything – your shirt, sneakers, and cell phone, the car keys in your pocket, the purse slung across the back of your chair – got to you after it left the factory in a big metal crate that was nestled among a few thousand other big metal crates on top of a really big metal boat. Boat is actually he wrong noun here, officially they are known as container ships. They are football fields long, and designed to do one thing: transport unfathomable amounts of goods from port to port. The author of Ninety Percent of Everything, Rose George, talked her way onto one of those ships, the Kendal Maersk, as it sailed from Denmark to Singapore over the course of a month.

The story George aims to tell is not the story of the goods on the ships but rather a broad view of what goes on in the industry that gets the car from the factory in the Philippines to the showroom in Peoria. It’s the story of an exploited workforce, a fleet that is organized in a way that to call it byzantine doesn’t really do it much justice, and economy of scale that is so great, it throws normal logic right out the window.

The Kendal Maersk, despite being roughly the length of three football fields, is actually a medium sized container ship holding a maximum of 6,188 containers that are 20 feet in length. George estimates that the global fleet of container ships in active operation numbers in the vicinity of 100,000 ships. Do the math on that and you’ll realize that there is an extraordinary amount of goods floating around on the world’s oceans at any given moment. This fact alone is what makes the shipping industry so successful. It can move enormous amounts of goods with frightening efficiency. That fact is also what creates a logic to the industry that is headache inducing. Because shipping is so efficient (read: cheap), it makes more sense for cod, farmed in Scotland, shipped to China (read: cheap labor) to be filleted, and shipped back to Scotland to go to market, than it would for the product to stay put. George’s greatest feat in Ninety Percent of Everything is spelling out how, in the world of the shipping industry, up is almost always down.

Shipping registries, the country under which a ship operates, follows the up-is-down logic and subjects it to a bad trip. A simple example is a ship may be based in Denmark, but registered in Panama, in which case it would have a Panamanian flag on its stern. The industry term for this practice is “flag of convenience.” There are a variety of advantages this system confers on the owner of the ship leading George to quip that “even offshore bankers have not developed a system as intricately elusive as the flag of convenience.” The bad trip part comes in when you take into account that even though the ship may be part Danish, part Philippine, its captain could be British, its crew exclusively Philippine, and its owner a Russian via a shell company registered in Greece. Regardless of any of those nationalities, once that ship gets a certain distance from shore, it’s beholden to none of them. It’s a system that makes it very easy for one party to exploit another and George does an excellent job spelling out the many abuses that take place within. Unpaid workers, abandoned ships and deadbeat owners all make appearances.

George is correct to point out that the vast majority of people are ignorant to the inner workings of the container ship industry, but the one aspect most of the general public are aware of is the threat of Somali pirates. The captain of the Kendal Maersk at one point even questions George’s sanity in picking a ship that would sail straight through pirate infested water when she could have had her pick of any ship. Regardless of her sanity, she spends a good portion of the middle of the book delving into piracy as the ships crosses the Gulf of Aden. George takes interludes to meet with a Portuguese interceptor ship charged with the needle in a haystack mission of blocking pirate ships and a veteran hostage negotiator who works for weeks on end arbitrating with pirates on the behalf of shipping companies. Both are interesting asides, neither as harrowing as the tales of ships that are occupied for years at a time like the MV Iceberg, which was held for over three years. Even piracy, for all its brutality, is subject to the insane logic of the shipping industry. The Maersk Alabama, and its captain, Richard Phillips, were headline news when Navy Seals rescued them in 2009. Captain Phillips was hailed as a hero for his actions after the ship was held. He is currently being sued by his crew for ignoring company policy by sailing closer to the Somali shore than Maersk mandates.

George covers the broad spectrum of the shipping industry in Ninety Percent of Everything, illuminating an industry that is a vital part of our everyday lives and virtually unknown to us as we go about it. Following the warped logic that pervades the industry, perhaps that’s the way it should be.