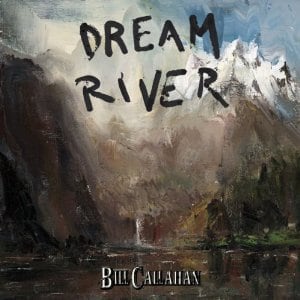 [xrr rating=3.5/5]Bill Callahan put his Smog moniker in mothballs after 2005’s A River Ain’t Too Much to Love. That was eight years and five albums ago. His work over that span has shown a restlessness and daring musicality that points in previously unexplored directions. The results are at times jaunty and boisterous, especially next to back numbers like “To Be of Use” or “You Moved In.” Now Callahan gives us Dream River, a set of eight songs which seems at times like a turn back toward introspection, but which continues to search for striking frames for Callahan’s smooth, unruffled delivery. While there’s nothing here with the seemingly uncharacteristic stomp and glitter of “Diamond Dancer,” Callahan has found a register that’s reflective but not brooding.

Opener “The Sing” finds Callahan in a hotel bar where, he notes, “Strangers unknowingly keep me company.” He’s still out among the people, but he seems to have turned his attention away from them. After all, he continues, “The only words I’ve said today are beer and thank you.” There is a sustained tension here between Callahan’s solitary and reflective tendencies and moments of outwardly-focused appreciation for experiences and individuals. The result is an unexpected cohesiveness: the spirit of one informs and enriches the other. He’s grappling with dueling impulses, but his sense of mission here is strong enough to fuse the two into a single, telling whole.

Callahan intones, “You looked like worldwide armageddon/ While you slept,” over a galloping beat to open “Javelin Unlanding.” The track begins an on-and-off flirtation with the flute. It’s a questionable choice here, especially as a counterpoint to the atmospheric guitar work of “Spring,” but on “Summer Painter” the same instrumentation feels like an appropriately eerie through-line. “Ride My Arrow” seems to be an acoustic ballad but quickly changes tempo to an arrangement that isn’t as natural a fit for Callahan’s voice. It has its moments all the same, as he exploits that incongruity by mixing the prosaic (“I don’t ever want to die”) with the oddball assertion that “Some people find the taste of pilgrim guts to be too strong/ Me I find I can’t get by without them for too long.” It’s no less jarring when sung than transcribed, but it somehow atones for the unwelcome shift in pace. “Seagull” is similarly restless, devolving into murmured vocals and swirling instrumentation as the song progresses.

At his best, though, Callahan remains essential listening. On “Summer Painter” he sings, “I painted names on boats for a summer/ For luck you keep the same first letter” with the aforementioned flute guiding the way. “Small Plane” is endearing with its pretty, deliberately paced vignette in which Callahan repeats, {“I really am a lucky man”} with genuine warmth, as if quietly giving thanks for his good fortune. “Spring” is vintage Callahan, all the way down to lyrics like “All I want to do/ Is make love to you/ With a careless mind/ In the fertile dirt.” On album closer “Winter Road”, Callahan notes, “I have learned/ When things are beautiful/ Just to keep on.” With Dream River, Bill Callahan, circa 2013, is doing just that.

[xrr rating=4.5/5]It didn’t feel quite like a shock when Jason Molina passed away in March…