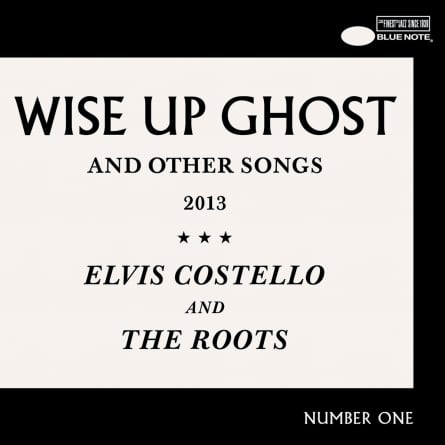 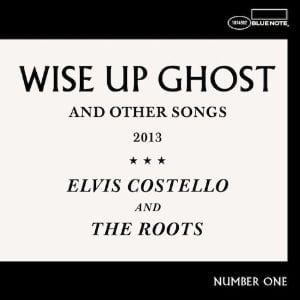 Who exactly is the Ghost on this project? Both Elvis Costello and the Roots have done their own background fades while collaborating with other artists and styles, but neither side hides their light on Wise Up Ghost. Instead, the album resurrects a collection of specters from Costello’s songbook, recasting lyrics and melodic references in an updated setting. Sometimes this teases out new meanings but for the most part, it just shows how relevant his words remain. This concept, though, is worrying on the surface. None of Costello’s fans want to think of him tossing integrity to the wind, finding a young group of hipsters to harness and then rearranging old songs in a desperate plea for relevance. They already know that he’s not a Frank Zappa, constantly stealing from himself to create a web of contextual references, so there’s been some concern about his creative direction on this project.

But none of that distress is justified. Instead, the album captures the best elements of its collaborators. The Roots’ deep dedication to a centering groove is honored across all these songs. Although their MC, Black Thought, is not present, ?uestlove’s steady syncopation and the band’s sparse arrangements create a hip hop vibe that is designed to support and exhibit the vocals. Rather than trying to play rapper, Costello steps in and takes advantage of the space, letting his phrases wander across the beat the way he always has, whether the genre of the moment is new wave or country. Furthermore, Wise Up Ghost has a dystopian tension running through it and a yin-yang balance of bitter and sweet lyrical themes that place it squarely in the median of Costello’s discography, even if the production and music favors the Roots’ aesthetic approach.

It turns out that this isn’t Costello’s attempt to redefine himself. Rather, the album arose from impromptu jams when he performed with the Roots on “Late Night with Jimmy Fallon.” During their early meetings, bandleader ?uestlove asked Costello if he’d be interested in “remixing” some of his older songs. This led to new versions of “High Fidelity” from Get Happy (1980) and “(I Don’t Want To Go To) Chelsea” (This Year’s Model, 1978). Based on those successes, the two sides started thinking about working together on a larger project and this remixing approach must have seemed a natural starting point.

The reworking leads to some strong mood changes for the material “Stick Out Your TONGUE” stretches out Punch The Clock’s “Pills and Soap” like taffy and jettisons its scathing urgency for weary cynicism. Similarly, “She’s Pulling Out The Pin,” an extra track on 2004’s The Delivery Man, becomes “(She Might Be A) GRENADE” and transforms from a snapshot moment of personal desperation to a CSI-style incident analysis, encouraging a more literal reading of the lines.

The stand out example, though, is “WAKE Me Up,” which appropriates lyrics from two different songs. The spare funk groove is bruised and brooding, with the dark imagery from “Bedlam” (The Delivery Man) perfectly balanced by a chanted refrain of, “Wake me up, wake me up…/ With either a slap or a kiss,” from the title track of River In Reverse (2006). Costello’s lyrics and trademark vocal tone is complemented by the Roots’ rhythmic treatment.

As intriguing as it is to play spot-the-reference, Wise Up Ghost offers all new material, too. The album opens with “Walk Us UPTOWN,” which is a vibrant sign of the group‘s collaborative mindset. The Roots lead off with a noise funk intro that sets up a 2Tone ska groove. The lyrics have a repetitive power, driven by Costello’s sneer. Lines like, “Will you wash away our sins/ In the cross-fire and cross-currents/ As you uncross your fingers/ And take out some insurance,” demonstrate how his phrasing naturally reflects the rhythmic complexity of a rap to fit with the Roots’ backing. The modern production style emphasizes the beat while the band references Costello’s past use of ska, like in “Watching The Detectives” (My Aim Is True, 1977). Horn stabs, guitar chank and reverberating echoes and fills offer plenty of interesting detail without over-crowding the track.

In addition to “Walk Us UPTOWN,” Wise Up Ghost often alludes to Costello’s musical past, but his wide range of styles and influences means that the songs have no problem finding unique angles. “TRIPWIRE” blatantly steals much of its melody from “Satellite” (Spike, 1989), but the Burt Bacharach style ballad features new veiled lyrics that make a plea for tolerance. Another track, “SUGAR Won’t Work,” blends band approaches, with a chorus that falls in line with Costello’s earlier work interpreting R&B and verses that could have been lifted from a Charlie Hunter jazz-funk session. The album closes out on a soft piano ballad, “If I Could Believe.” After the darkness and misanthropy of many of the preceding tracks, Costello’s vulnerable delivery is a poignant ending.

Supported by the apparitions of his creative history, Costello dominates Wise Up Ghost, but the Roots played a strong role in summoning these spirits. The album has a vitality that reflects a good artistic partnership, where risks were taken and everyone was challenged. Fans will find plenty of what they love about Costello or the Roots, along with new facets to enjoy.