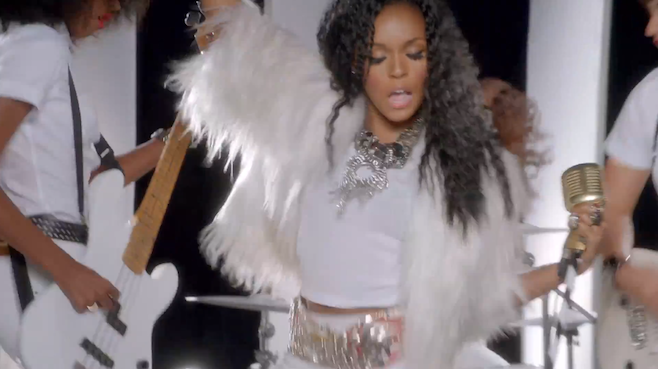 “Dance Apocalyptic,” the second single from Janelle Monáe’s The Electric Lady, has been kicking around for a couple months now, but hearing it in the context of the full-length release makes its soaring pop and beautifully repurposed future-funk sound even better. That’s in part because it’s one of the first tracks that turns over the spotlight to Monáe, after a string of heavy-hitter guest stars, including Prince and Miguel, making its exuberant energy feel all the more freeing. With a voice as vividly alive as Monáe’s, she’s the only one needed to fill a track to bursting.

The quality prognosis for any reunion album isn’t good, particularly when you’re an out of practice Southern hip-hop group whose most famous member has long since departed for greener pastures. Thankfully, this isn’t Dru Hill, and “State of the Art (Radio Killa)” finds the group reuniting in auspicious fashion, with a track that seems as interested in sonically murdering Cee-Lo as in welcoming him back to the fold. Full of horror movie strings, sirens, robot voices and other weirdo touches, the song foregoes the usual back-together-at-last ceremony to immediately plunge into full-scale oddness.

Can a song be both haunting and bombastic as hell? Somehow Kanye West pulls it off with “Blood on the Leaves,” the booming highlight from his newest album, Yeezus. Featuring a jacked-up Nina Simone-sample and horns from TNGHT, West chronicles a story of divorce and disloyalty under hot, sweaty lights that are anything but pretty or flattering.

With the leaves slowly turn colors as they die and fall, and as the days shorten and grow cold, putting on a sinister Trentemøller track just feels devilishly right. The Danish producer’s newly-released Lost is chock full of ominously cinematic tracks to choose from (though some of the songs with actual vocals are unfortunately skippable), but none are better than the horror soundtrack-tinged “Still on Fire.” The driving metallic beat twists up into a pure spine-tingler in the song’s middle section—calling to mind Nine Inch Nails’ “Closer” at one point—and this song is the perfect prelude to the Halloween season.

The track definitely isn’t one of the more complex Jackson and his Computerband (aka Jackson Fourgeaud) productions, but the dark ambiance of “Arp #1” is a must-have on an end-of-the-summer/fall playlist. Showcasing Fourgeaud’s appreciation for nostalgic synths, the track’s five-minutes is a body-gyrating endeavor through the fun of late ‘80s indie-dance beats. The Parisian producer doesn’t lean too heavily on his predecessors, infusing the electro charm with a heavy dose of rock dissonance for his own signature take on French house.

The Damned cover “Street of Dreams” might not have gotten a lot of play prior to the recent release of Frankie Rose’s Herein Wild, but “Minor Times” is a more fitting representation of the album as a whole. It’s got a steady, clattering rhythm, Rose’s smoky vocals catching the breeze to airless heights and a dreamy pulse that drives all of Herein Wild. Though not as immediately memorable as “Street of Dreams,” it’s equally resonant.

A greatest hits ploy though it may be, this tune is worth resisting the temptation to casually dismiss. As a collaboration between the Killers and M83, “Shot at the Night” sounds exactly like what you’d expect in a mash up of the two, the latter’s Anthony Gonzalez furthering the Las Vegas quartet’s steady trajectory of increasing grandeur and electronic textures. Maybe it should be campy, but as Brandon Flowers belts “Give me a shot at the night” amid hypnotic synth notes and big, ‘80s-style drumming, there’s no denying the affecting sincerity.

Ty Segall surprised us when he went acoustic this summer, proving that he can virtually do no wrong. “Sweet C.C.” is reminiscent of T. Rex, loose on the bass strings and heavy on the hook. It gets stuck in your head when the solo comes in at the end because you keep hitting repeat.

Fans of Brooklyn indie punk band Parquet Courts will be happy to know that “You’ve Got Me Wonderin’ Now,” the lead track from the group’s upcoming EP, Tally All the Things That You Broke, is as fun and vivacious as anything from the group’s breakthrough LP, Light Up Gold. The tune features the catchy melody, relentless rhythm and pleasantly nasty guitar chords that we might expect. The band surprises us, though, with an innocent-sounding recorder or toy flute that doubles the vocal melody.

Coming Apart, the debut full-length from Kim Gordon’s Body/Head duo (along with guitarist Bill Nace), finds the former Sonic Youth-er in some serious experimental territory. With “Actress,” however, Body/Head’s improvisations (musically and lyrically) come across more structured-sounding than other points of the record, with razor-edged drones and reverberations pulsating around Gordon’s grunts. Just picture the furthest outreaches of some of Sonic Youth’s most out-there noisescapes (see “The Diamond Sea”) and you’ll get the idea.