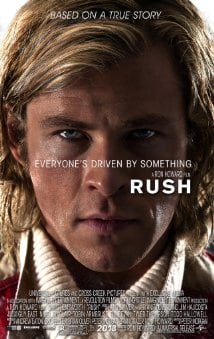 [xrr rating=2.75/5]Ron Howard has long been one of the most Hollywood of the Hollywood directors and his ardent aversion to taking risks has produced one of the best-crafted yet most vanilla bodies of work of any high profile filmmaker. His latest film, Rush, continues the later career trend begun in Cinderella Man and Frost/Nixon of focusing on an uplifting moment of in history that even the crustiest cynic would appreciate.

Rush tells the story of the competition between two Formula One drivers: the brash and beautiful Brit James Hunt (Chris Hemsworth) and the calculating and arrogant Austrian Niki Lauda (Daniel Brühl) who tangled during the 1976 racing season. Howard allows the two men alternating voiceover narration, setting up the rivalry. But it isn’t really clear which man Howard is celebrating until well into the film, an ambivalent tactic that may seem altruistic but instead alienates the viewer from the two men on the screen.

As Howard’s workmanlike manner moves the film steadily towards tragedy, Lauda and Hunt trade insults, get famous and race their cars. Working once again with screenwriter Peter Morgan (Frost/Nixon), Howard tries to frame Formula One drivers in the same way that Top Gun looked at fighter pilots, as men who flirt with disaster. While Lauda is the more risk averse of the two, the blonde and blue-eyed Hunt tells us that women are attracted to the brand of fatalism Formula One drivers exude. Howard backs up this assertion with a good deal of sex scenes wherein Hemsworth is given ample opportunity to bear his body.

The film’s turning point comes when Lauda is badly burned during a horrible accident. Up until then, the car races are less than exciting. It is clear that Howard is more interested in the fireworks that take place off the track. As Lauda fights his way back, Hunt is steadily catching up to his lead in the races the Austrian driver must miss. It is clear that Howard is more in Hunt’s corner, brushing past Lauda’s technical brilliance for Hunt’s Adonis charm and brash carpe diem demeanor.

Rush is a solidly made film that could actually stand to live up to its title a little more. Except for Lauda’s accident, I never really felt the dance with death Hunt so often opines about in his voiceovers. I am far from a Formula One fan, but the lack of character development and the inert racing scenes left me wanting to feel the excitement more. For a well-crafted sports film, look no further than Gavin O’Connor’s Warrior, a film where both the characterizations and the competition scenes are hair-raisingly real. That said, Rush still has its fair share of fun sequences, especially when the mild-mannered Lauda shows off his need for speed on a narrow country road in Italy. But it all goes back to Ron Howard, and Rush bears all the trademarks of his work – crowd-pleasing, “important” films that are easy to digest and even easier to forget when you walk out of the theater. It’s a simple formula, just not a good one.