January 23, 2021
Home Music Chvrches: The Bones of What You Believe 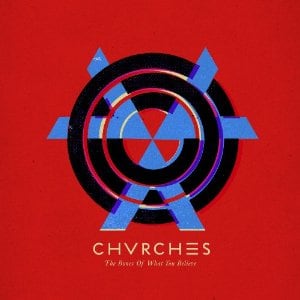 [xrr rating=3.25/5]The indie music blogosphere is full of also-rans. Sad as it is to contemplate, the fact that practically anyone can release a few tracks online is double-edged. It’s possible to build a staggering level of buzz that was previously only achievable therough relentless years of touring or the muscle of a record label. Now all it takes is some well orchestrated imagery and a few catchy songs. The success of the Weeknd alone proves that. On the other hand, the deluge of recordings available threatens to drown out those who don’t immediately catch a wave of adulation. The Scottish trio Chvrches haven’t had to deal much with this. All three members are music industry veterans, and their combined talent almost immediately landed them in music festivals and ensured their debut album would be feverishly awaited. So now that The Bones of What You Believe has arrived, will their buzz be sustained? Can they live up to the hype? Probably.

The Bones of What You Believe is a neat packaging of 12 solid synth-pop songs, reportedly recorded and mixed by the band themselves. But while it’s satisfying enough, the album can’t help but feel like a pleasing combination of its biggest influences without much personality of its own. It’s not hard to hear the murky darkness of Depeche Mode in the strident drums and hushed background vocals of “Science/Visions.” Similarly, while singer Lauren Mayberry has a fine, girlish voice, the distinct blend of vulnerable badassery perfected by Robyn is clearly a huge influence on her multi-tracked vocals and lyrics. A track like “Lungs” thrives off Mayberry’s choral melodies, and the chugging keyboards, courtesy of Iain Cook and Martin Doherty, sound like mid-period Orchestral Manoeuvres in the Dark, which is hardly a bad thing. It is simply noticeable that Chvrches is still working out their own sound, polished as the album is.

Fortunately, The Bones of What You Believe opens with a one-two-three punch of their best songs. For those who’ve never heard their music before pressing play, debut single “The Mother We Share” would win them over a listener instantly, beginning with an echoing vocal of Mayberry and cascading into a brilliant, soaring chorus. The track settles into empty spaces occupied by nearly only the singer’s voice and a barely there synth before roaring back up, and it is simply miraculous. The following two tracks, “We Sink” and “Gun,” are nearly as good, the former anchored by the warmly bitter chorus, “I’ll be a thorn in your side/ Til you die/ I’ll be a thorn in your side/ For always” and the latter showcasing Mayberry at her most aggressive. It does leave the album sounding somewhat frontloaded, as the remaining nine tracks never approach the quality of the openers, but it’s still the trio at their best. As an album, it hints at diminishing returns, but who knows? Chvrches has already shown they can surf the buzz of the internet, maybe they can keep doing it to more consistent music.