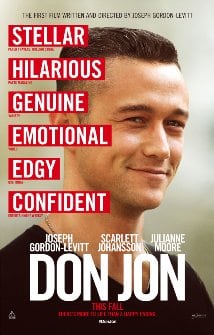 Soon after he meets Esther (Julianne Moore), written in as the sage, older woman who is more or less a deus ex machina to set Jon on the path to love. She’s the silver lining to Don Jon’s “After School Special” message: that one won’t really enjoy sex until he begins to consider his partner’s needs as well. Otherwise, women are simply props and not that much different than his hand. Well, duh, but Don Jon treats this news as if it’s a Big Life Realization™.

Moore is fine as Esther, but the fact that she doesn’t sound like she’s from New Jersey underlines an even bigger problem with Don Jon. Gordon-Levitt is an excellent actor, but his Jon plays like a typecast of an Italian-American that could have stepped out of De Palma’s Wise Guys or Spike Lee’s Summer of Sam. Startling and funny at first, Jon’s Guido accent presents a problematic look at working-class Italians from New Jersey, reinforcing stereotypes of that population as comedy. Don Jon blames its protagonist’s porn addiction on his Catholic upbringing and the scenes when Jon goes home are rife with these knotty moments.

Featuring Tony Danza and Glenne Headley as his parents, Jon’s family comes off as a grotesque caricature of the Machimist tradition, down to the white wife beater and sports blaring on the television during dinner conversation. When Jon brings the smoking hot Barbara home for the first time, I was surprised that Gordon-Levitt didn’t draw a cartoon over Danza’s face where his eyes bulge out, his tongue rolls down and smoke shoots out of his ears. Yeah, maybe Gordon-Levitt thinks he’s mining deep territory with the whole virgin-whore conundrum, but it has been done to death in the past.