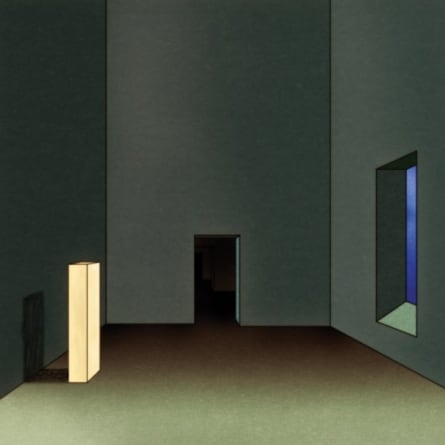 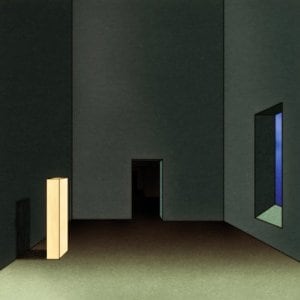 On “Boring Angel,” Daniel Lopatin kicks off his latest effort as Oneohtrix Point Never with the tension building sustain of a church organ. It’s sweeping and cinematic, eliciting the sense that something grand is about to happen, and you would be forgiven if you thought an Arcade Fire song was about to break out. The piece progresses with Lopatin holding a chord for several bars, then switching to a new one, eventually coming back to the root before a spiral-y Animal Collective riff kicks things to an unfamiliar tempo above the same organ chords.

Of all the words used to describe Lopatin’s music, the word ‘chords’ has almost never previously been used. On “Boring Angel,” and in many other spots during R Plus 7, there’s structure. Patterns and themes are present throughout, and even when they trail off or morph, they almost always seem to reappear in some form. It’s as if Lopatin has added a heavy layer on top of the ambient sound collages he was already creating, offering something more substantial to latch onto and get immersed. It’s not safe to call these traditional in the song sense, but for Oneohtrix Point Never, it’s a pretty big leap.

What might be most interesting about Lopatin’s deepest foray into structure is how much rhythm there is given the fact R Plus 7 contains no percussion. Lopatin likes to drive tempo through his phrasing, which often consists of starting and stopping passages ahead of the beat to simulate movement. Though the tribal feel of “He She” is compelling, “Zebra” is the best example of this, as syncopated gunshots of synth swirl around a circulation of static sound collages and random keyboard flourishes. Even though it’s probably the most straightforward piece Lopatin’s performed, he still finds a way to get weird by fading the theme and breaking into space-y, almost free jazz territory.

Lopatin really showcases his ability to combine experimentation and the establishment of roots within the same track. “Americans” borders on New Age, rainforest music, which Lopatin uses as a foundation for building layer upon layer of synth, background vocals and what sounds like xylophone. As he does throughout, Lopatin stretches out during the bridge, deconstructing the pieces until they’re unrecognizable before reforming them in some sort of variation. It’s a little different on “Still Life,” which feels like it’s chugging along, picking up steam and feeding itself before taking a down-tempo drone detour that ends with an intense synth assault.

Oneohtrix Point Never’s excellent 2011 release, Replica, seemed to offer a space in which to get lost inside. While R Plus 7 offers plenty of those type of moments (see the heartbeat pulsation of “Cryo”), overall there’s a much more tangible storyline here. While “Inside World” hints at the soundtrack work Lopatin’s been doing, the small cinematic movements of the album-closing “Chrome Country” are most telling. Feeling like it’s going to conclude beautifully, the loud church organ abruptly reappears, bookending the record very intensely and very reverently. It’s R Plus 7’s last chapter, but it gives the sense that it’s Lopatin’s first.

Mike Randall is a displaced Yankee living in Chapel Hill, North Carolina (y'all). During the day he is a recovering ad guy in marketing for a tech company. When he gets home he works for the four-year-old you see pictured. If these things are your bag, including but not limited to slap shots, sailor language, Mitch Hedberg, library books and Baba Booey, he can be found on Twitter at @mykrandall.