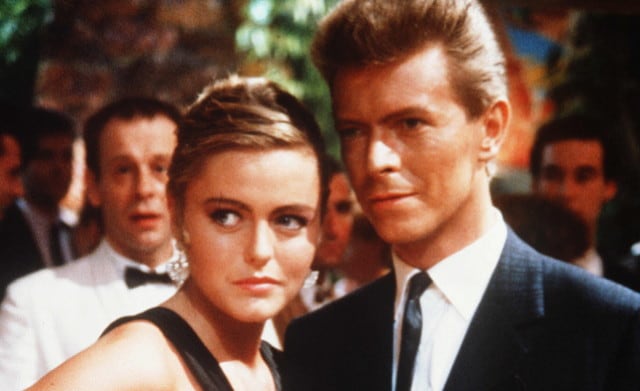 Director Julien Temple cut his teeth on music documentaries, a genre to which he’s returned in recent years. This is a man who went from The Great Rock ‘n’ roll Swindle, about the rise and fall of the Sex Pistols, to directing Janet Jackson videos. But Temple’s music videos were some of the best of that commercial art. In his continuous tracking shot that makes up his video for Jackson’s “When I Think of You,” the director brings a great energy and technical flair to the art of selling music. So it’s ironic that his fiction feature debut, Absolute Beginners, lives by the concept of selling out.

The movie was going to be the last hope for a struggling British film industry, but it didn’t come close to breaking even on its 8,000,000 pound budget and was widely panned. The New Musical Express went so far as to call it the media con of 1986. Absolute Beginners limped its way across the pond the following year. I first saw it when I was 19, on a screen that is still one of the largest in the Washington area. Even though I call it underrated, I have to admit the movie is a failure. Yet I saw the movie four times during its American run and programmed it years later for a repertory series. I revisited it again this weekend, a dozen years since I had last seen it, and I am sorry to say its sparkle in my mind has diminished. The movie’s flaws are more obvious on home video, but as a big-screen spectacle, even though it did not reach the heights it aimed for, I loved the aim. It is a spectacular failure.

Stylized in the vein of Vincente Minnelli, it can recall the director at his most superficial (a sluggish dance duet between Eddie O’Connell and David Bowie on a neon-drenched London soundstage recall segments of Minnelli’s mediocre bauble Ziegfeld Follies). Temple’s film is set in 1958, and he riffs on contemporary and then-future movies: from musicals such as Funny Face and West Side Story to dramas like Sweet Smell of Success and Joseph Losey’s The Servant, which starred Absolute Beginners’ James Fox. And, as a Rolleiflex-weilding young photographer, O’Connell’s Colin recalls Peeping Tom. 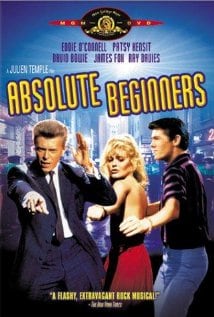 The movie’s flaws start at the top. Patsy Kensit and O’Connell do not have the charisma to capture the excitement and energy of the period. Melody Maker quipped that in one scene where O’Connell is supposed to look dejected, he gives the kind of look you’d see on someone caught on a news camera while the producer desperately tried to locate file footage of Nicaragua. A scattered script does not help the actors. The movie is plagues by issues of pacing and tone: Kensit’s colorful kiss-off routine “Having It All” segues immediately into O’Connell lip-syncing the Style Council’s “Have You Ever Had It Blue?” and the film’s race riot final conflict resolves too easily into a version of Miles Davis’ “So What” with embarrassingly specific lyrics.

But this is an underrated column. I revisit the movie with some embarrassment for my younger enthusiasm. I did not realize Bowie’s dancing was as bad as it was, but the choreography in general does not leave a mark. What’s left is loads of ambition and music. It was more than enough for a 19-year-old just starting to learn about movies. The opening tracking shot, not unlike the shot in Temple’s “When I Think of You” video, seems a moot point in the age of digital video, but as a feat of technical bravura, it captures a youthful energy despite actors who aren’t up to the challenge. And the music helps. Bowie’s soaring title theme, whose extended version runs eight minutes, earns its teenage angst. Sade’s sultry “Killer Blow” is one of the more successful production numbers in the movie. Ray Davies hit a rare post-”Lola” high with “Quiet Life,” a study of English reticence amidst insanity that Davies could have written in 1968. And some of the movie’s best music is not on the official soundtrack. Gil Evans’ arrangements of Charles Mingus provide a passionate backdrop to major set pieces: “Boogie Stop Shuffle” scoring a fight scene in the movie’s opening tracking shot, “Better Get Hit in Yo’ Soul” signaling the joy of Colin and Suzy’s courtship.

In the movie’s world, creative ambition and racial tension are conflicts that defined a generation of British teenagers. By the end of the movie, that youthful energy and inflamed passion are both co-opted, by exploitive music moguls and real estate speculators alike. Temple has traded in his expansive pop vision for the relatively quiet life of music documentaries. Absolute Beginners may be known as Temple’s folly, but as a youthful folly it can still inspire young and young-at-heart filmmakers. Aim high. Even if you fail, you gave it your all.