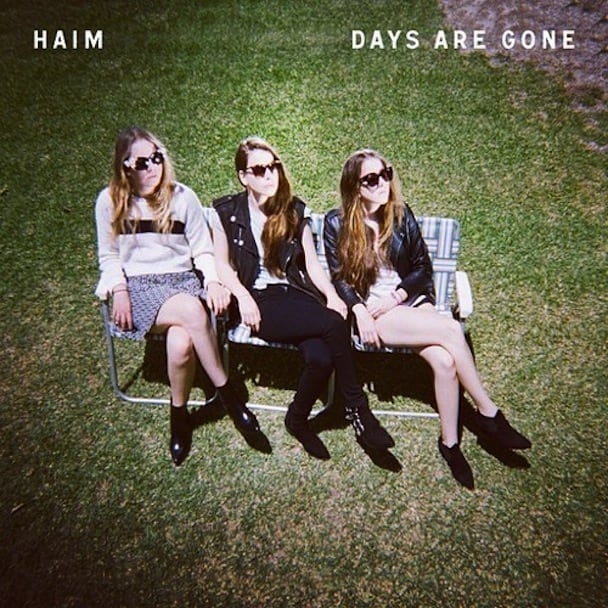 [xrr rating=4.0/5]The beneficiaries of exhausting buzz well before the release of their debut album, Haim are the latest test case for the modern life cycle of band adulation, from praise to backlash to reassessment to disdain to who knows what. Sprinkling singles and EPs across the past two years, the three sisters from the San Fernando Valley who gave their last name to their band kept interest piqued across the blogosphere and earned some modest chart success in the UK, home of their primary record label, Polydor. Now the full-length bow, Days Are Gone, arrives with a level of anticipation and excitement otherwise reserved for fresh releases by well-established artists. It certainly comes across as a major effort, with the pure craft of it rivaling anything else out there and an effusive sense of confidence.

In some ways, their music is made for the current moment: driving, intricate, often ingenious pop songs, creative enough to snare ears and spin heads on the very first listen. “Forever,” a track originally released as their 2012 debut single, starts with a hesitant hiccup of a drumbeat before giving way to an enticing dance floor rhythm and thinly layered music that bends around the forceful vocals with the focused shrewdness of a Robyn song. Like or not, how could anyone not want to more, want some sense of where this cascading amalgamation of sounds comes from? A new potential antecedent asserts itself every few seconds, always feeling inadequate—just a little off—almost immediately. Here’s the slightly oddball comparison I’ve finally settled on: this is what Wilson Phillips might sound like if Wilson Phillips were actually really fucking good.

I’ll fully admit that my tangled citation is partially based on the most superficial elements: a trio of females developing sibling-enhanced harmonies atop sleekly produced straightforward pop. (Besides Este, Danielle and Alana Haim, former Wires on Fire drummer Dash Hutton is considered an official part of the band.) The Haim sisters acknowledge a debt to music from the 1970s, but there’s also a clear shimmer on early ‘90s pop to their sound, especially the time when rapidly advancing studio technology made it irresistible for aspiring chart-climbers to incorporate tried and true R&B technique into their songs, but without necessarily transferring the deep soulfulness that marked the best of the genre. “If I Could Change Your Mind” is the biggest hit that Taylor Dayne never had. While remaining consistent, the album simultaneously feels like it can spin off in any direction at any given time. Try to pin it down and it will deliver a new surprise or at least a splendidly unique mashup of musical sensibilities. Build a time machine and break all the rules and “Honey & I” is the collaboration between 2013 Vampire Weekend and 1979 Rickie Lee Jones that makes careless tinkering with the space-time continuum fully worth it.

I don’t know if I can figure out the band’s concentrated perspective, expressed through either the music or the lyrics. If the music is slippery, the lyrics are wispy as clouds, the sorts of things a listener starts singing along to without any concern for (or even awareness) of the meaning. The weirdly spooky, mildly industrial-tinged “My Song 5” might have lines or regret and defiance like, “I’ve been dying to know what you’ve tried/ You’ve been lying so/ Honey, I’m not your honey pie,” but they’re not tethered to any noticeably strong emotions. That’s typical of the content, with songs filled with commonplace pop song concerns, though seen through warped glasses. It’s debatable as to how much depth the album has. Happily, with every track and especially the superlative sum of the album’s parts, Haim is making the argument that it may not matter. It can be great anyhow.

Three of the bands four previously released singles are piled onto the front end of the record, including spiky “The Wire” (which sounds to me like it pilfers its crunching backbeat from, of all places, the Eagles’ “Heartache Tonight”). After that, Days Are Gone is abounding with discoveries, giving the impression that Haim are deliberately pushing themselves towards greater originality with every passing track. The title cut is slinky and triumphant, and album closer “Running If You Call My Name” is spacey and quietly fierce. It’s like a preemptive strike against pigeonholing or, maybe more so, the sort of reductive criticism that’s sunk a fleet of buzz bands that disappointed when they expanded beyond their attention-getting internet hit (somewhere out there in the vast world, Black Kids are still wandering in small circles, shell-shocked). The waves are vicious. Haim give every indication that they’re ready to ride them.