April 17, 2021
Home Food No Manwich Tonight and Other Ways to Improve Your Life: Charcuterie and Cheese 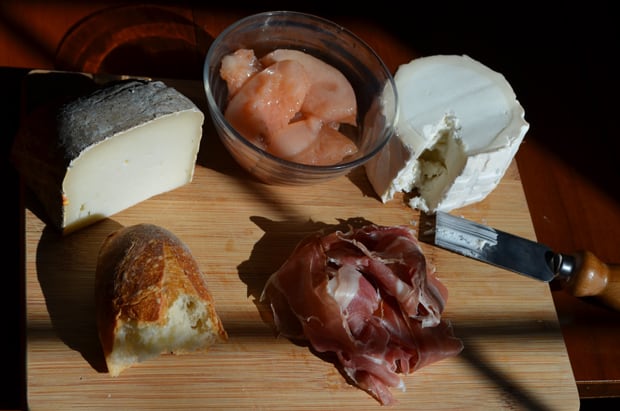 STACEY: Tom, I’ve recently become obsessed with charcuterie and cheese plates, if “obsessed” means “ordered it twice this calendar year and really enjoyed it.” Until now, I’d been known to artfully stack some kielbasa rounds and cheddar cubes on a fancy plate and call it a day. I won’t stop doing that, of course, but my world became much bigger when my friend and I indulged in this sampler of pâtés, cheeses, spreads, mustards, pickled things and let’s not forget about saucisson sec, if you please! But as with most things foodie, it’s easy enough to eat (they even served it on a lazy susan! so considerate!) but putting a plate like this together at home is another matter entirely. Can you give me the basics? Heaven forbid I pair the onion jam with totally the wrong cheese! Also: (somewhat) affordable is key and nothing too weird (I swear the second time I had some sort of tongue, which I tried but only while fighting back tears).

TOM: Have you ever seen the scene in Airplane where the passengers line up to smack the hysterical woman? Calm down my friend! Cheese and charcuterie are supposed to be fun. Tell me this doesn’t sound like a good time: I went out to a local shop this weekend and bought a quarter pound each of purple haze, Humboldt fog and some Spanish garrotxa. I can’t bring myself to make a lame weed joke here so let me come clean and tell you that they are all varieties of goat cheese procured from the Village Cheese Shop in Mattituck. (Sidebar: cheesemakers, please stop naming your cheese like some sort of heady strain, “man.”) After that, I went across the street, got some prosciutto from the Love Lane Market, drove back home, dug up some peaches I pickled a few weeks ago, sliced up a baguette and, voila, gourmet cheese plate. So how hard was that to really put together? I’ll tell you, the hardest part was eating all that while watching my beloved Giants play like they mainlined Ambien before the game for the third week in a row. Getting the cheese was easy – the game? Not so much.

Here are the basics: First and foremost find a good butcher and a good cheesemonger close by. If you live in a city, like say, Philadelphia, this should be easy. On the east end of Long Island where I live, it means driving roughly 20-30 minutes which is the price we are willing to pay for good cheese. If, by chance, you are reading this and live in the eastern part of Suffolk County, I highly recommend the Village Cheese Shop in Mattituck, and American Cheese in Sayville and the Village Butcher in Quogue for charcuterie. Once you find a good store, ask them what they recommend. I wouldn’t know that garrotxa is a Catalonian goat cheese that’s relatively mild or that the imported Iberico Ham is $99 a freaking pound and maybe I should just stick with the imported prosciutto at the Village Butcher Shop if I didn’t ask questions first.

STACEY: Cool, cool. I do have a cheese guy, believe it or not. Philly folks, I’m not telling you not to go to Di Bruno Brothers (it always feels like an event you have to gear up for), but The Chestnut Hill Cheese Shop is my go-to. They’re handing you samples before you even ask, which, oh, don’t mind if I do! Since I’m always at least 7-12 deep in line, my method has been to pay attention to what other folks buy, and basically pick three of varying textures. That’s either spontaneous research or laziness, you choose. The owner is insanely knowledgeable, so each order becomes a conversation, which is where I eavesdrop on instructions and recommendations.

TOM: It’s true, these are specialty stores and their proprietors tend to be people who are very passionate and all too willing to talk about their goods. I’ve found that finding good cheese is a little easier than finding good charcuterie. To that end I also highly recommend Olympic Provisions. They are based out of Portland, OR but you can shop online too and their products, while pricey, are very well done. Try the pork rillettes particularly. Likewise, good prosciutto might isn’t the easiest thing to track down either if you don’t have a good Italian butcher in the neighborhood. If that’s the case I can’t recommend La Quercia prosciutto enough. I’ve been ordering direct from them for years and the prosciutto and speck are out of this world good. They’ve expanded a lot in the recent times and you might be able to find their products in a local retailer but their website works just as well. Plus, they are based out of Iowa and not the foothills of Tuscany which is cool and strange on many levels. Iowa, who knew?

Don’t get too hung up on pairings. I like to have three cheeses, two kinds of charcuterie, some sort of fruity pickle or jam and a sliced-up baguette on the platter when I serve cheese at the house and that’s it. Have onion jam instead of pickled peaches? Fine. Remember too, a little cheese goes a long way. I buy in quarter pound increments because of that reason and also, good cheese is expensive.

STACEY: So if I’m getting this right, the trick is to identify your best resources, whether it’s your friendly neighborhood cheesemonger or a prosciutto supplier in America’s heartland. On the plate, the rest kind of takes care of itself. I can handle that. Maybe this Thanksgiving my pre-dinner contribution will be something other than spinach and artichoke dip. Watch out, family!

TOM: So all you have to do is go shopping really. That and pickle peaches (recipe below) because I have an insane culinary ego and demand that you follow my recipes.

Put the fennel seed, mustard seed, peaches and thyme into a canning jar or two depending on the size of you jars. Split the ingredients as necessary. Pack down the peaches so they fit tightly into the jar, leaving a little room at the top, roughly a quarter inch. Bring a large pot of water to a boil. In a large saucepan, combine the water, vinegar and sugar and bring to a boil. Once the sugar is dissolved, turn the heat off. Fill the jars to the top, leaving a quarter inch. Tap the side of the jars to bring up any air bubbles and seal them tightly. Process the cans in boiling water for ten minutes. Remove and let the jars cool before storing. The peaches will be ready to eat in three days. Refrigerate them after opening. They will keep for about two weeks after opening or six months in the pantry.