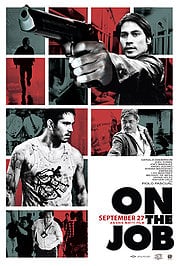 [xrr rating=2.0/5]A pair of hit men (Joel Torre and Gerald Anderson) pulls off a bold assassination in the middle of a crowded street festival in Manila. One of the killers is an old pro; the other is young and less experienced. This tension between generations plays itself out on both sides of the law in director Erik Matti’s ambitious crime drama On the Job, Matti casts a broad net on a troubled country.

After the very public killing that opens the film, the killers spend time with their families. The younger Daniel (Anderson) calls his mom, the older Tatang (Torre) sees his wife and kids. Tatang tells his daughter he’s a truck driver and can only get so much time off, but after a night in their corrugated tin-roofed shack, he gets ready to go back where he came from: New Chapter Provisional Jail.

On the law enforcement side, thirty-year veteran Sgt. Acosta (Joey Marquez) uses his fists to get a lead on the killing, but is soon pushed off the case by young Francis (Piolo Pascual), whose father in law is a high-ranking official. If something smells rotten in this, there’s a reason. But will you care?

If Matti is known at all on these shores, it is for his contribution to the horror anthology The ABC’s of Death 2. The director based On the Job on the real life scandal of prisoners sent out as assassins and returned to their cells with ready alibis. He paints a dire picture of the Philippines as a land of poverty and brutal corruption that leads from police headquarters right to the halls of Congress. It’s a great setup for a gritty action movie. But only in its final act does Matti convey the strong passions that lead to such bloodlust.

The movie is competent but not compelling. The cinematography by Ricardo Buhay III tracks behind the film’s characters as they move from impoverished residential areas to the steamy hell of a Filipino prison, a steadicam allowing for long takes that immerse the viewer deep into an unfamiliar world. Musical Director Erwin Romulo cites DJ Shadow and Lalo Schifrin as his influences, and his musical selections help propel the action, whether it be via a pummeling Black Sabbath-like anthem or a pulsing electronic beat.

But despite outbursts of passion and bloody anger, the actors don’t completely sell the movie. The film runs a full two hours, but even this isn’t enough time to establish the busy ensemble. There are too many characters to gain real traction with the viewer. We are immersed immediately in shocking bloodshed, but shock is not enough for us to be invested in these characters, either for or against them.

Torre has the right action movie gravitas to play a grizzled assassin, and has over 150 credits, most of them in the Filipino movie industry. But his American efforts have been limited to bit parts: a chauffeur in McBain and “citrus Samaritan” in The Bourne Legacy. The veteran is the most distinctive of the actors assembled here, but it’s not enough that he’s the one you remember.

The movie’s back-story is more interesting than the movie. Marquez (Sergeant Acosta) served three terms as Mayor of Parañaque, part of the Philippine’s bustling Metro Manila region. Michael De Mesa (Congressman Manrique) is son of popular musician ad movie star Eddie Mesa, known as the Elvis of the Philippines. These kinds of connections will resonate for Filipino audiences more than American moviegoers, adding a welcome texture that does not translate across cultures. Which wouldn’t be a bad thing if the movie worked better than it does.

Johnnie To took similarly complicated, merciless crime material in this year’s Drug War and ended up with one of the year’s best movies. On the Job is not a bad movie, but given its exotic, vibrant location and scandal ripped from the headlines, it had the potential to be more than just a generic crime drama.