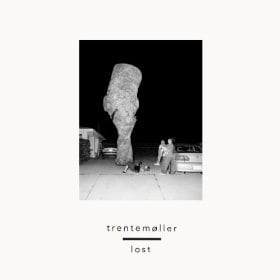 [xrr rating=3.5/5]If you were to put together a soundtrack for a dark night of the soul, you wouldn’t need to look much further than Anders Trentemøller. The prolific Danish producer’s music often dives into the murkiest of depths while also surfacing for sublime moments of dancing in pale moonlight, but on the whole his sound is minor-key rife, ominous and dark as ink. For a producer who’s had so many irons in the fire— slinging out singles, various compilations and even a Danish film score, while also collaborating with the likes of Thom Yorke and remixing other portent-heavy acts including the Knife and Röyksopp—it’s easy to forget that his new record, Lost (released on his own label), is only his third proper studio album. It’s also his most accessible, though it comes up shy of being his best.

Trentemøller’s spectacularly sinister debut, The Last Resort (2006), was his most viscerally unnerving record, with creeping, wriggling tracks like “Chameleon” and “Evil Dub” spliced between dark thumpers like “Night Walker” and the pensive “Moan.” In 2010, he went big with Into the Great Wide Yonder, offering up the sprawling throwdowns of “Silver Surfer, Ghost Rider Go!!!” and “Shades of Marble” that projected a cinematic scope. But both those records were aural archipelagos, requiring the listener to bridge chasms between the shifting moods of each track. On Lost, we’re treated to what feels like an entire concept rather than a collection of perilous islands, as Trentemøller has found a satisfying balance between his penchant for sonorous female guest vocals and his brooding instrumentals.

His indie rock leanings that revealed themselves on Yonder are heightened on Lost, as he taps vocalists from Low, the Raveonettes and the Drums. This is a mixed blessing, as his fingerprints fade when collaborators step into the limelight and take the mic. Trentemøller has long straddled the duality of tender introspection and kinetic force, as though the brain behind the music has been split down the middle. ”The Dream” opens the record ethereally, featuring Mimi Parker of Low on vocals. As an intro to the album, it’s a sleepy one, more along the lines of Trentemøller’s picks for his edition of the Late Night Tales mixtape series than his own distinct touch as he keeps to the shadows in this one. In that way, “The Dream” feels like emerging from deep sleep, and the album doesn’t begin to stir until second track “Gravity” with a fuzzy bass pulse (briefly calling to mind LCD Soundsystem) that gives way to the Yann Tiersen-like whimsicality of chimes and glockenspiels as Lost begins to yawn and stretch its way to life.

And then “Still on Fire” hits, leaving us to realize we’re waking into a smoldering doomsday. The first track that features nothing but the man of the hour, this instrumental sizzles and spits, with foreboding effects that sounds as though the previous chimes are warping as they’re pushed through a glass darkly. Midway through it all blows up into a chilling electro-beat that at one point harkens back to Nine Inch Nails’ “Closer.” From there, Trentemøller’s pals return en masse. “Candy Feeling” resumes a dreamier tone with the familiar vocals of Marie Fisker, who played the same role on Yonder’s “Sycamore Feeling.” Jonny Pierce of the Drums pitches in some whinier vocals on “Never Stop Running” but eventually hijacks the entire track by the chorus and turns it into a forgettable caterwaul. Ghost Society’s contributions on the churning “River of Life” are more subdued and work far better. Blonde Redhead’s Kazu Makino provides the best vocal turn on Lost, her fragile-as-glass voice pairing well with the gloomy, subterranean drip-drop pace. But Sune Rose Wagner (the Raveonettes) isn’t too shabby on the simmer and slide of “Deceive.” These latter songs drive home the fact that Trentemøller’s music is best when airy vocals complement his sonic dreams and nightmares rather than taking them over. These reprieves from the darkness are needed periodically, though I’m far more likely to skip over the more vocal focused tracks to get to discordant solo instrumentals like the clattering “Trails,” the Motorik-thrumming “Constantinople” or the lugubrious “Morphine.”

Trentemøller has constructed his most balanced album to date, even if his guest stars sometimes unnecessarily outshine his production. Lost fits into his trilogy of terrors snugly, and with all he routinely has on his plate it’s always a treat to get another formal studio effort, one that will hopefully spawn another North American tour. The lengthening shadows of autumn provide the ideal backdrop for a new Trentemøller record, and Lost is one that’s equal parts chilled-out and chiller.