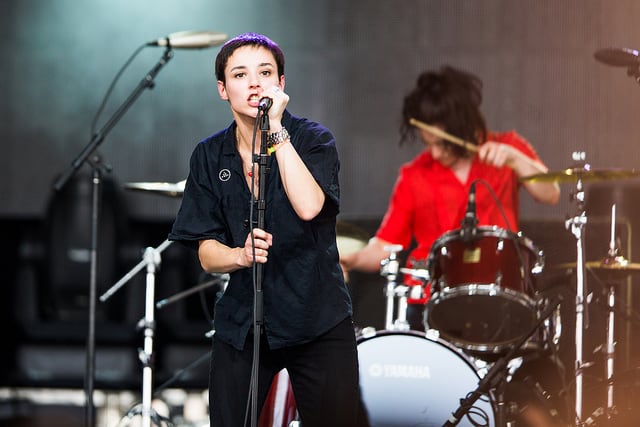 1) People tend to live life through their phones. Just look around during your daily commute or at a party. That little piece of plastic and glass has become the lens, the prophylactic, the buffer separating us from the true experience of the world. Is it a safety net? How many times have you been to a concert recently where the dude in front of you films the entire thing, hands upstretched the glare from the screen distracting your experience, let alone preventing him from being part of the experience? We all know the quality is going to suck and even if it doesn’t, how often are you going to replay your concert experience? Once? Maybe twice? As we entered the Wonder Ballroom before Savages’ show a warning, no, a manifesto, asked us to silence our phones (yeah, I get the Silence Yourself tie-in). “We believe that the use of phones to film and take pictures during a gig prevents all of us from totally immersing ourselves.” Indeed. People still took video, but it seemed a good many people took heed.

2) The crowd: I totally expected a room full of dour hipsters twisting ironic mustaches, standing dourly with dour little arms crossed. Instead, I felt positively young amongst the gray beards and vintage Joy Division T-shirts. The crowd didn’t vibrate with the sweaty energy promised by Savages’ music, but when my friend called out to me, “Look at all the old people,” the woman next to me smiled and said, “Good!” And I agree.

3) Portland rock royalty like Savages! Are you surprised? While I was having a drink with the members of EMA at the bar beneath the Wonder, Carrie Brownstein walked by. It was hard not to feel like we were in an episode of “Portlandia” all of sudden, but Brownstein is about as cool as it gets in this town. I saw her once highlighted on the Jumbotron during a Blazers game. We don’t really have any other sports heroes here to pick on.

4) Jehnny Beth: have we seen a more ferocious singer debt in recent years? Beth stalked and pulsated across the stage half-Sinead O’Connor, half- Siouxsie Sioux, all Ian Curtis twitchy, nostrils flaring, the whites of her eyes bulging out in dire fervor. As she tore through songs such as “Strife” and “Shut Up,” it was easy to imagine the room transported back to somewhere in the early ‘80s, maybe the Factory, somewhere dangerous, at a rock show where anything could happen. It really did feel that way.

5) The unexpected ones: Suicide cover “Dream Baby Dream” was an appropriate choice to pad out the setlist. “Fuckers” was a bone-headed rocker and a screaming fuck-off to “every fucking fucker you met in your life.” But while Savages are known for their louder tracks, the slow-burning “Marshal Dear” left a burning impact, perhaps why the band returned to play it as the encore. “I hope you’re breathing your last breath,” Beth entreats someone in a song that recalls the darkness of the Bad Seeds mixed with the silkiness of Pulp. It gave us a moment to catch our breaths and though the air was vile and filled with anger, it suited the evening just fine.