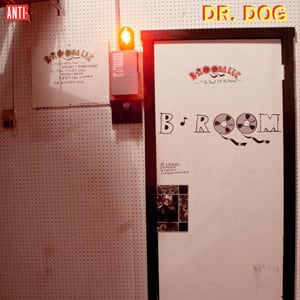 [xrr rating=3.0/5]For their seventh studio album B-Room, Dr. Dog built a whole new studio at home in Philadelphia with intentions of starting from the ground up. They recorded everything live and even brought in some horns. Seven albums ago, they were an overlooked Philly outfit, crossing psychedelia with folk harmonies and overt dissonance. Now, they’re criticized as an exhausted effort, recycling sounds of hits past. Constantly, Dr. Dog is compared to elite, culture-defining 1960s bands (and they sometimes do it themselves) like the Beatles, the Band and the Beach Boys. But that holds them at an unfair disadvantage. (Honestly, it’s an unfair disadvantage for any band.)

Between the six members, Dr. Dog finds a way to keep it interesting. For one thing, they have two lead singers: Toby Leaman on bass and Scott McMicken on lead guitar. Leaman’s voice is deep and raspy, providing a perfect tone for the ballads they sprinkle in on every record and McMicken has a more upright, pop-friendly soprano voice. The remaining four also contribute harmonies, giving their albums an actual three dimensions. Between seamless rhythm guitar work, keyboard, organ, piano and this time the cello and accordion, B-Room’s sound has a lot of depth to explore.

Openers “The Truth,” “Broken Heart” and “Minding the Usher” echo Dr. Dog’s past songwriting, using cute, rhyming lyrics and their go-to harmonies: it’s familiar, perfected territory. “Too Weak to Ramble” is an acoustic peace offering, showcasing Leaman’s vocal skills as a crooner. It leads the way into the second, meatier half that features reverbed vocals and organ solos reminiscent of freakier 1960s bands like the Doors. “Cuckoo” hints to Ray Manzarek while Leaman’s voice serenades like Julian Casablancas – a combination that doesn’t seem like it would work, until it does.

But then it gets weird. “Twilight” opens with a sharp pitch of what sounds like a bow playing a hand saw and McMicken comes in with lyrics that are too cliché, even for Dr. Dog superfans. They aren’t making the most exciting music out there right now. They’ve never been doing to that. The thing about Dr. Dog records are, when you listen to them, you know what you’re going get.

B-Room is a lot like their recent releases Be the Void and Shame Shame. How varied their songs are has become their consistency. Your favorites are the really great songs with hooks, perfect guitar work and memorable lines, while the other tracks are questionable, like throwaways. They lead us to believe that they have it in them, but the fact is, they’re really holding back. They include a chorus of out of tune saxophones, but too infrequently. Leaman curses on “Rock & Roll” and it only sounds out of character. Never mind that it’s just another song about how rock ‘n’ roll can change your life. (You’d think there were enough of these songs already.) But none of this seems to matter to Dr. Dog. They’ve always been moving in the right direction with composition and song progression, but the songs on B-Room are too sprinkled with mundane lyrics. This record just feels routine.

In the end, though, they’re a great band that won’t conform to negative reviews and they haven’t for 11 years and counting. (They are also an amazing live show.) They rest comfortably outside the industry standard and let it lie. B-Room isn’t a Dr. Dog classic, but it’s a safe bet.

[xrr rating=3.75/5]Deer Tick records are like drunken nights when you get ripped with your…