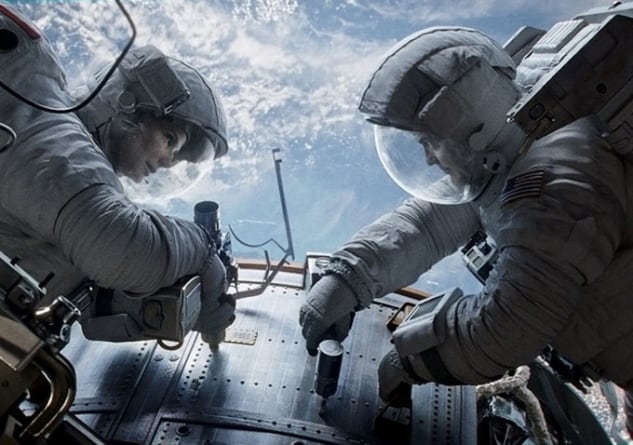 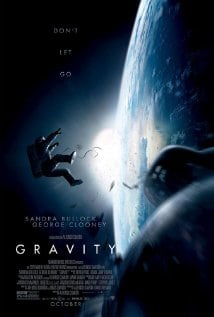 The emptiness of space is a tableau often romanticized in the movies, but likely in effort to make something beautiful out of a place where we were not meant to survive. In efforts from Apollo 13 to The Right Stuff, outer space is a place of magical beauty, its vacuum and sinister barrenness subverted by every shooting star and moon rise. Even in Stanley Kubrick’s chilling 2001: A Space Odyssey the grandeur of spacecraft is pinned to a gorgeous spacescape, the melodies of Strauss helping its ships float along in opulent splendor.

In Alfonso Cuarón’s Gravity, space is not a mystical realm where dreams come true, although the amazing cinematography can trick us into believing otherwise. This is a film that takes a hard look at the realities behind space travel. It isn’t a place you would want to be when the shit hits the fan.

As the film begins we meet Dr. Ryan Stone (Sandra Bullock) and Matt Kowalski (George Clooney) as they are working on the Hubble Space Telescope. Kowalski is an astronaut who has reached the end of his career while Stone is a civilian engineer who NASA has brought in to do work on the telescope. It is natural for Stone to be fearful while Kowalski is gregarious and relaxed. That is until something goes wrong and the two of them must find a way to survive against increasingly slim odds.

But back to that silence of outer space. Gravity is a terrifying, claustrophobic experience, and one that I wished had been silent throughout. As dangerous debris hurtles in orbit at our heroes, there are no gigantically audible explosions, only the magnificence of silent destruction in outer space. Cuarón has created an absolutely singular experience that is a marvel to watch. The Earth is appropriately beautiful, filling in the blackness as the action takes place nearly 400 weightless miles above. In an early scene, Stone is knocked loose from the Hubble and floats untethered into the nothingness of space, her breathing and Kowalski’s entreaties the only thing we can hear. It’s frightening and disorienting and the most effective scene in the entire film, something that Cuarón chooses not to replicate as Gravity propels itself to its exciting second half.

Written with his son Jonas, Cuarón’s screenplay for Gravity keeps the film from reaching masterpiece status, hence the wish for silence. Clooney is given lines of glib reassurance and never once did I believe his character felt distress, even with imminent death looming. Stone’s backstory felt completely unnecessary, and a late-game hallucination works against Gravity’s taut pace, bringing the film down from orbit to a plane more maudlin.

I’ve never been a big fan of Sandra Bullock and Gravity is her show. Although she spends a good deal of the film panting and gasping for breath, she still manages to grate, while Clooney reads his Kowalski lines as if he were Buzz Lightyear or something. I understand the need for big names to sell a film, but the star power (no pun) illuminating Gravity detracts from, rather than adds to, the spectacle. I never really believed the danger afoot because I was too busy thinking about Sandra Bullock and George Clooney floating around in outer space. Neither is really capable of vanishing into a character and with Cuarón’s script, which is obviously secondary to incredible effects and camerawork, neither is given much to do except dodge shuttle debris.

It is good to see a film about outer space that doesn’t glamorize its nothingness, but Gravity still resorts to a stirring score and some story clichés rather than completely commit to the void. I’m interested to see what Robert Redford does with the sea, a similarly empty and inhospitable place, with All is Lost. The early buzz is of a terrifying film of extreme minimalism. Gravity had a chance to be the greatest movie about space ever. Instead, Cuarón settled by making merely a very good-looking one.