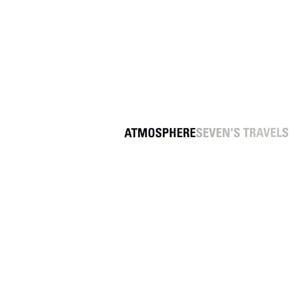 It’s been 10 years since the distance between hip-hop’s underground and mainstream realms got a little shorter, as Minneapolis rap powerhouse Atmosphere’s fourth album Seven’s Travels took the duo of rapper Slug and producer Ant from the jammed packed nooks and crannies on the road they’d paved after a decade on the underground grind to Best Buy and MTV2. For many listeners, it was their first exposure to the group whose Minnesota struggles and slice-of-life made for quite the contrast to the Roc-A-Fella and G-Unit dominance of urban radio at the time. But it would be inaccurate to paint what Atmosphere was doing as direct opposition to their contemporaries. Despite what any number of “I hate all rap except…” or “Indie music US vs. THEM” journalists tried to paint Seven’s Travels as, the record could have really been made any year. While the influences from rap’s golden age are heavy, it could be theorized that Seven’s Travels caught on because it sounded like it could have been made in a bubble, something defined not by what it wasn’t, but what it was.

Of course, a decade later Atmosphere remains at the very, very least one of the top three biggest names in indie-rap. Their fanbase has remained loyal and their sound has evolved in several directions since Seven’s Travels broke through the underground rap glass ceiling. The relentless touring in support of the album, which included stealing the show at the following year’s Vans Warped Tour, showed the music on Seven’s Travels had quite the mileage. Yet, despite being such a commercial success, both Slug and Ant will be the first to tell you it isn’t their best work. Slug’s said in several interviews that he was never really happy with how the album came out, citing it was a mixture of the scrapped songs that were too happy for their previous album God Loves Ugly and some newer songs that they had just recorded. I interviewed Ant last month for the album’s anniversary, and he stated, “There’s not a whole lot of great shit on that record,” describing the formula as being some of their much older songs put next to the new stuff they had recorded whenever Slug was home in Minneapolis from touring, most of which were about his voyages. Ant said there’s about four or five songs which, because of their age/subject matter “don’t belong” on Seven’s Travels, and knowing that now, it becomes easier to hear why critics at the time had a hard time with so much of the project sounding all over the place. If you listen to the second half by itself and then go back and hear the album straight through, it really is bizarre to hear “Bird Sings Why the Caged I Know” and “Gotta Lotta Walls” so close to the start when they sonically and conceptually veer so far from the rest of the project.

Perhaps the best way to appreciate the finer sequences on Seven’s Travels is to take it as not so much a concept album, but a compilation of material that follows a theme which all happens to be previous unreleased. Given how truly grueling Slug’s touring schedule was at the time, the tales of debauchery and the character studies that the album’s lyrics primarily focus on play to his talents incredibly well. Likewise, the finer moments of Ant’s production here were some of his most full-bodied beats to date. As unpredictable as they were complex, the nuances in “National Disgrace” and “Reflections” still turn up new treasures even this far removed from the release date.

But while some of the songs do reveal themselves to be quite out-of-place when analyzed, what holds the project together is the masterful use of sound clips in-between tracks. Slug, by his own admittance, became fascinated by his own pocket recorder at the time and was capturing audio everywhere he went. As a result, the very real sound clips of airports, planes and traveling in general gave the otherwise hodgepodge outing a sense of cohesiveness. It’s a very Prince Paul-esque move, which is fitting as Slug at that juncture was referring to the variety-sounding Seven’s Travels as his “De La record.” It may be an attribute that gets lost in the cherry-picking post-iPod era, but hearing every track in order from start to finish does make Seven’s Travels feel almost like someone giving you a detailed description of the most interesting vacation of their lives in mixtape form.

Slug and Ant’s work ethic and creativity were hitting one of their first peaks. Along with putting out two albums in two consecutive years, the plethora of B-sides and bonus tracks as well as cuts from compilations (you would be hard-pressed to find a rap sampler from this era that they weren’t on) shows just how much quality material the two had. While professionally Seven’s Travels was immensely important for the legacies of Atmosphere, Rhymesayers and independent hip-hop from both the Twin Cities and nationwide as a whole, the off moments don’t quite do justice as to what made them such a beloved breath of fresh air in an already jam-packed 2003 musical climate. Even if the lesser material is best remembered as the moments between some of their all-time best work (“Trying to Find a Balance,” “Denvemolorado”) and fan favorites (“Always Coming Back Home to You,” “Cats Van Bags), the supplements of the sound bites keep the project together as a fun listen.