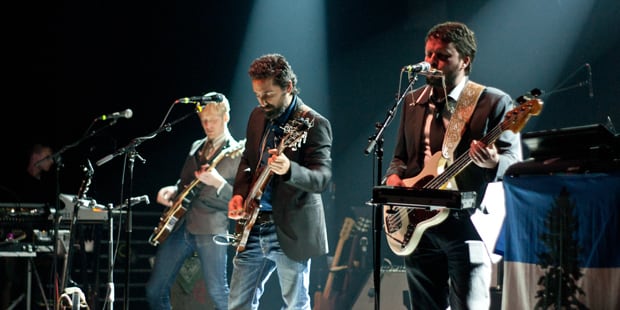 Twenty miles west and worlds away from the university town of Chapel Hill, North Carolina, is a place called Saxapahaw. It’s an old mill village with a population of less than 2,000 people and an organic lifestyle that would make Boulder envious. Since 2011, the town described by the New York Times as “the middle of somewhere” has also been home to what’s become one of the most interesting music venues in the country, the Haw River Ballroom. Nestled along the banks of the Haw River in a former cotton mill, the Haw River Ballroom has made artists from Stephen Malkmus to Lucinda Williams gush thanks to the town’s relaxed bohemian vibe and the building’s stunning architecture, setting and decor. When Blitzen Trapper pulled into town a few days ahead of the release of their latest record, VII, they revealed that they were already told they’d be in for something special.

Four shows into a run of nine consecutive nights on stage, and in a region where they’ve pretty much been annual visitors to Chapel Hill’s legendary Cat’s Cradle, Blitzen Trapper clearly enjoyed a literal change of pace. Although they’ve been leaning heavily of late on their two most recent albums, American Goldwing and Destroyer of the Void, the band seemed to adjust the tie a little bit, digging deep into its catalog while also debuting a significant portion of VII. Even occasionally-ornery frontman Eric Earley seemed relaxed, exchanging banter with the crowd, sharing funny stories between songs and taking requests (re-learning the Wild Mountain Nation gem “Country Caravan” on the spot was quite impressive).

Things did not get off to the best start, however. Opening number “Love the Way You Walk Away” was halted by Earley almost immediately thanks to some underperforming monitors. Rather than spoil the mood, the inconvenience served as a preview to a show that felt more like a band performing informally in a living room than an established venue, especially when it came to new music. In Blitzen fashion, the newer tracks are varied stylistically, but are much looser and more groove-oriented than their recent output, and the crowd approved. Aside from “Furr” and “Black River Killer,” “Thirsty Man,” a funky, psychedelic rocker with a trance-like riff that morphs into an effects-heavy solo by Earley, received the loudest reaction of the night.

On record, many of the new tracks lack energy, but when performed live they really jump. Per usual, classic rock, folk and country influences are all over VII, with some new elements added. “Heart Attack” comes off like a Joe Walsh song, but “Shine On” features a percussive “Superstition” riff that really allows the band to get down. For “Don’t Be a Stranger,” Earley shed the blazer he’d been wearing the first half of the night and pulled out an electric banjo, plucking something reminiscent of Neil Young’s International Harvesters period as guitarist Erik Menteer sprayed a layer of honky-tonk riffs. No song received a better introduction than “Neck Tatts, Cadillacs,” however. A heavy number that combines Lenny Kravitz with “Achilles Last Stand,” it was inspired by a former factory co-worker of Earley’s who stole equipment to make a homemade tattoo gun. Earley rejected the guy’s offer for free ink.

As Earley strolled to the stage by himself for the first of four encore songs, he intricately strummed the country folk of American Goldwing’s “Stranger in a Strange Land.” It was a fitting end to an evening in a place unlike any Blitzen Trapper will visit on their current North American tour, and the band played like they knew it. It was one of those special nights in music when the musicians truly receive as much as they give, and everyone in attendance realizes they are a part of a moment that could only exist right then, right there.