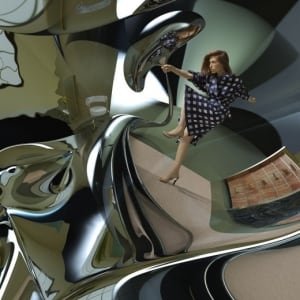 [xrr rating=3.0/5]Concept albums can be tricky. If they work, they are frequently more powerful than a traditional album. If they don’t, they can be disastrous for a musician’s career. Glasser’s sophomore album Interiors is directly inspired by the architecture of New York. Since making the move from Los Angeles, Cameron Mesirow aka Glasser has almost exclusively mused on the inherent impersonality of soaring skyscrapers and the limitations of a condensed life. The result shrugs off the electro-tribal beats of her debut Ring in favor of electronic – almost industrial – synthesizers and puts her powerful vocals front and center.

Whereas Ring emphasized vocal layering and folk-tinged percussion, Glasser completely reinvents her unique sound on Interiors. Since her debut, Glasser’s particular style of electro-pop has become more and more popular with the rise of artists like Grimes, Zola Jesus, Bat for Lashes and Fever Ray. It’s no coincidence, then, that Glasser recruited producer Van Rivers who had previously worked with Fever Ray to help mold the sound of {Interiors}. Thanks to this new partnership, her music at once begins to sound more like her genre contemporaries and progresses her songwriting to a new level.

Opening with “Shape,” Interiors wastes no time in showing just how much Glasser’s music has evolved. In this dubstep-tinged anthem to her new home and the concept of fluidity in design, she sings, “My home has no shape/ Nothing to sustain me/ But it keeps me safe/ From imagined pain.” Here, her clear vocal resonates over a thundering drum machine, as much an instrument in the song as its synthesizer. And throughout the album, Glasser experiments with that vocal element, using it to create melody and percussion alike. “Landscape” does include echoes of Ring’s tribal percussion before transitioning into a wholly different song towards the end of the track complete with crashing cymbals.

The most experimental music on Interiors comes in the form of the “Window” series. “Window I,” “Window III” and “Window II” (in that order on the album) are decidedly minimalist, short pieces that rely on tinny industrial clanging. In I and II, this minimalism extends to Glasser’s vocals, which barely include any discernible lyrics and are frequently limited to accompanying melodic vocalizations. “Window III,” however, has plenty of lyrics musing on the alienation of living in a metropolis. Thematically, this series offers an interesting take on architecture and the near-contact between the interior and exterior worlds. And “Exposure” expands on this theme by focusing on the ever-changing nature of New York. Tapping into the contemporary experience of rapid change and evolution, Glasser chants, “It’s a modern trouble: metamorphosis.”

The last two songs on Interiors stand out as somewhat separate from the rest of the album. “New Year” is lyric-centric and incorporates jubilant trumpet and saxophone sounds. It is undoubtedly the peppiest song on Interiors. “Divide” is the final, ethereal track and arrives on a wave of layered vocals and ambient synthesizers. Accompanying Glasser’s references to an ocean separating her from her family, she includes the bright strings of Chinese folk music. What makes these tracks stand out most, though, is an interruption in the thematic flow. Instead of continuing the reference to architecture that connected the previous songs, “New Year” and “Divide” focus on human relationships, though still with an emphasis on physical space.

While these decidedly different songs fit naturally in Glasser’s repertoire, Interiors represents a clear departure from the diversity of Ring. Yet the new Glasser is just as enjoyable and capable of creating stunningly complex layerings of compelling vocals and beats.